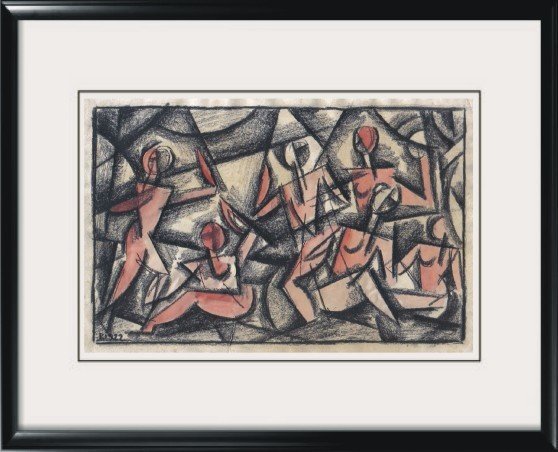 An original signed antique 1922 Russian cubist pastel drawing. This is a great example of early 20th century cubism in the early years of the avant garde movement. Great piece of early Soviet art which is not framed but shown how it would look if it were either matted or with a drop-in frame. The last photo shows the signature as PL 1922. Please use the zoom feature which allows you the opportunity to inspect items.

CONDITION: Excellent antique condition. No rips or tears. Overall toning and some foxing at the outer edge which would be covered by a matte but does not distract and I would personally feel comfortable just doing drop-in framing. There appears to be a small fold at the bottom, which looks to have existed with the artist did it based on the pastel paint pattern. You can see it just to the right of the signature and date - bottom left.

Cubism is an early-20th-century avant-garde art movement that revolutionized European painting and sculpture, and inspired related movements in music, literature and architecture. Cubism has been considered the most influential art movement of the 20th century.[1][2] The term is broadly used in association with a wide variety of art produced in Paris (Montmartre, Montparnasse and Puteaux) during the 1910s and extending through the 1920s.

The movement was pioneered by Georges Braque and Pablo Picasso, joined by Andre Lhote, Jean Metzinger, Albert Gleizes, Robert Delaunay, Henri Le Fauconnier, Fernand Léger and Juan Gris.[3] A primary influence that led to Cubism was the representation of three-dimensional form in the late works of Paul Cézanne.[4] A retrospective of Cézanne's paintings had been held at the Salon d'Automne of 1904, current works were displayed at the 1905 and 1906 Salon d'Automne, followed by two commemorative retrospectives after his death in 1907.[5]

In Cubist artwork, objects are analyzed, broken up and reassembled in an abstracted form—instead of depicting objects from a single viewpoint, the artist depicts the subject from a multitude of viewpoints to represent the subject in a greater context.[6]

The impact of Cubism was far-reaching and wide-ranging. Cubism spread rapidly across the globe and in doing so evolved to a greater or lesser extent. In essence, Cubism was the origin of an evolutionary process that produced diversity; it was the antecedent of diverse art movements.[7]

In France, offshoots of Cubism developed, including Orphism, Abstract art and later Purism.[8][9] In other countries Futurism, Suprematism, Dada, Constructivism, De Stijl and Art Deco developed in response to Cubism. Early Futurist paintings hold in common with Cubism the fusing of the past and the present, the representation of different views of the subject pictured at the same time, also called multiple perspective, simultaneity or multiplicity,[10] while Constructivism was influenced by Picasso's technique of constructing sculpture from separate elements.[11] Other common threads between these disparate movements include the faceting or simplification of geometric forms, and the association of mechanization and modern life. [Wikipedia: https://en.wikipedia.org/wiki/Cubism ]