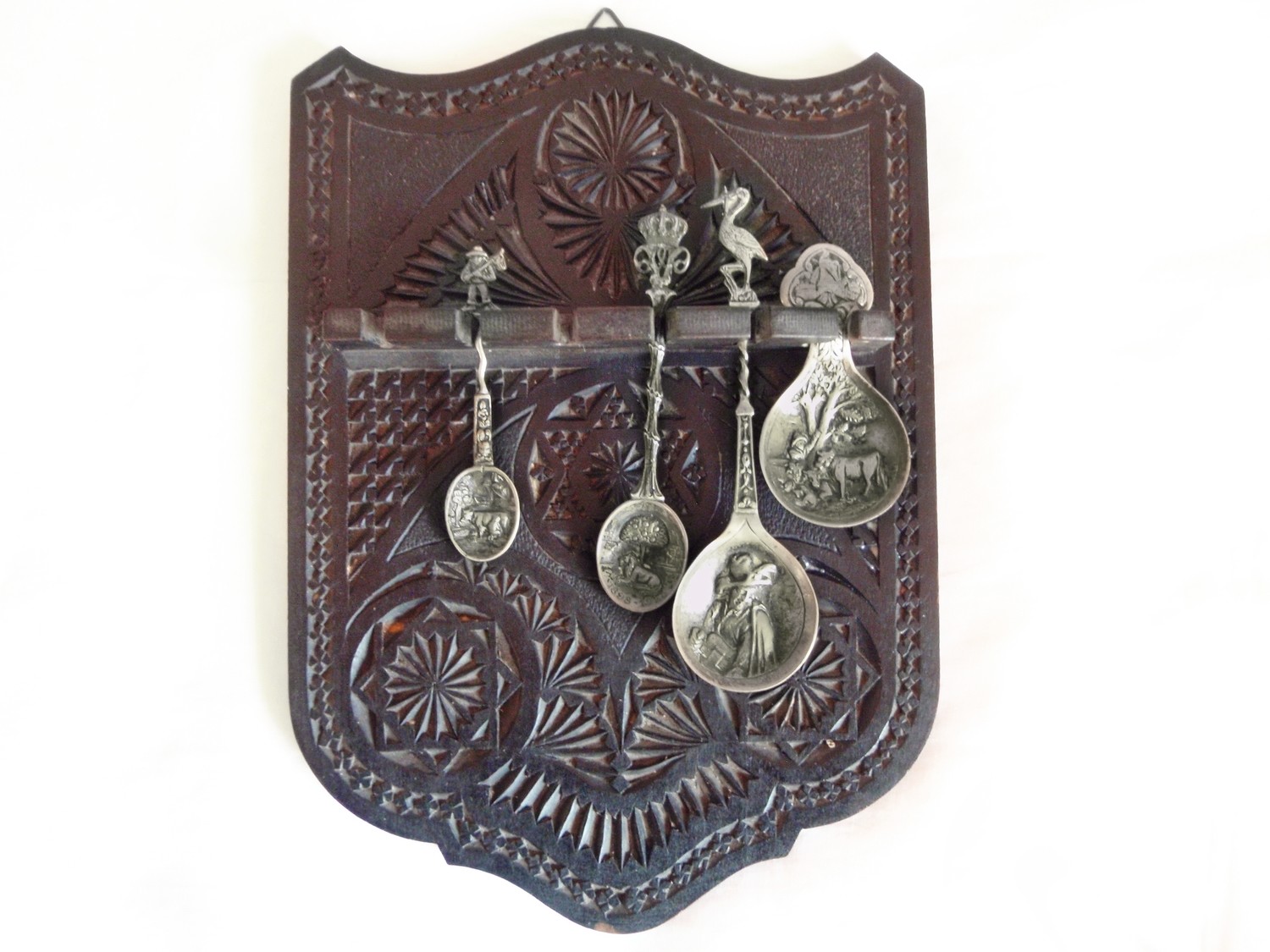 An amazing Frisian chip carved souvenir spoon holder - display with a collection of silver spoons dating back to 1893. The wood carved display made from the coastal regions of the Netherlands and Germany. This Friesian folk art wall display which comes with provenance as written on the back (see last photo,) which reads: 1893 - 1923. This collection of measuring tea in making by Paules Potters. The rest is hard to make out, but here it is: 1) cocktail spoon pictured of the home of Rembrandt in Hesswoeden; 2) cocktail spoon another view of Rembrandt's home, mill and cows; 3) Windmill in Muhlen (Molan) tea spoon; 4) Teaspoon on top crown for Queen Wilhelmina in honor of her 25th Anniversary as Queen. Lion and tree of liberty - 5th candy spoon or sugar tongs missing

I have not researched the spoons because quite frankly I don't know where to begin - so there may be some treasures here that I don't know about.

CONDITION: Very good antique condition. One small spot that is clear to the wood. Can be colored over but I didn't want to do it and create a potential misunderstanding.

The Frisians are an ethnic group with Germanic roots, who live today along the coastal regions of the Netherlands and Germany. The spelling confusion between Friesian and Frisian is not helped by the fact that they live around Friesland in the Netherlands and Frisia in Germany (which technically was Frisia in Denmark until the 1860s, but there’s already enough going on here and the various Frisian communities are still rather divided after centuries of being shuffled around among various European confederacies and countries). We will opt for Frisian, as the people this is most associated with in American decorative arts were typically Pennsylvania Germans.

Frisian carving in decorative arts refers to lightly carved decoration on furniture and small decorative objects. The designs are often rife with traditional Germanic symbolism – stags and hunt scenes, lilies, unicorns – as well geometric elements, with a draftsman-like precision to their layout – circles, triangles, and particularly pinwheels or fylfots. The carving is very easily distinguished from the dark wood, heavy-handed opulence of Black Forest carving; it is very clearly delineated but also done with a light hand and is also commonly known as chip carving.

It can be difficult to make firm attributions to Frisian/chip-carved objects, as it was done in both Europe and America. Within America there are several subgroups of the work (for instance, a group of spoon racks that are connected to New Jersey – one is pictured above), but the motifs and the wood choices are the best clues for making attributions. (It is worth noting however that because of extensive trade, as is often the case, mahogany is more difficult to attribute specifically.)

Frisian carving is also difficult to pin down in terms of value. There are many factors at work – from the usual suspects like the condition to the form (it was done on such a wide array of objects, from mirrors to beds to stands to spoon racks) to the age (older is almost always better but Frisian carving continued into the 20th-century when it becomes, technically, less Frisian and more chip-carving and when it is even connected with the objects identified as “tramp art”) to, quite simply, the quality. Small, newer pieces might only fetch a few hundred dollars, but larger and/or older works can easily bring thousands, even ten thousand, at auction.