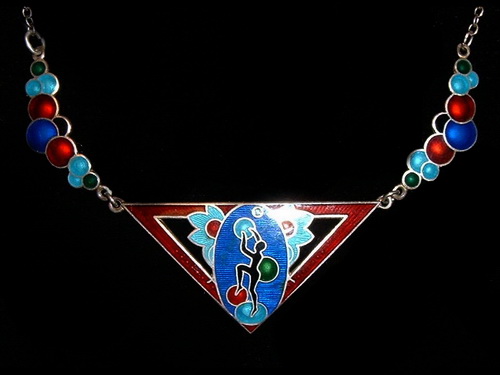 art deco c. 1920's sterling silver and multi- color guilloche enamel nude lady bubble dancer necklace. The nude is dancing in champagne bubbles with more multi color enamel bubbles forming part of the necklace. Reported to be the image, and pays hommage to Josephine Baker, the famous Black American dancer who was dearly loved by audiences on the continent in the Roaring Twenties. Truly a text book example of high art deco, the most decadent period of the 20th century, that lasted for a brief time and saw it's glory start to fade in the great Stock Market collapse in 1929 aka Black Friday. This is by far one of the greatest deco pieces that I have seen and comes straight from a private collection.

CONDITION: This piece is flawless. The enamel is all in tact, bright and lovely. The sterling mounting has a little darkened patina appropriate to it's age.

SIZE: The necklace is 15 1/2 inches long, sitting beautifully on the nape of the neck.

Josephine Baker was not well received in America, but did made quite a dynamic entrance to the Paris stage and society in the early 1920s. Her brilliant comic and sensual style appealed to the European mind-set and she took them by storm. She was everyone's darling, brazenly dancing her way to fame, with bare breasted, comic, irreverant abandon. Through her exotic looks and wild performances she was referred to as "Black Venus," "Black Pearl" and "Creole Goddess." There isn't a man who didn't want her, and admirers lavished her with expensive gifts including diamonds and cars, and reportedly 1,500 marriage proposals came her way. She had a stunningly long career lasting 50 years and her energetic performances didn't stop until her death in 1975. Because of the racial climate, it wasn't until 1973 that she took on cult-like proportions in the United States.