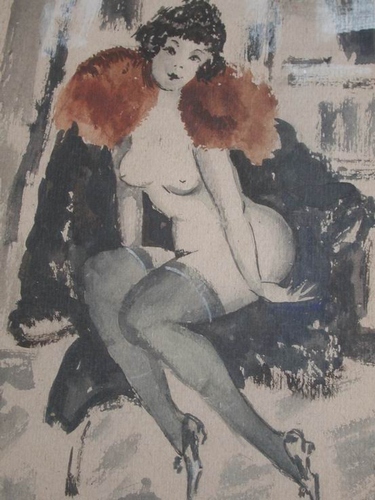 More vintage and antique Paintings and Illustrations Stunning art deco period c. 1920's watercolor painting by well known, listed Russian artist Konstantin Ivanovitch Rudakov (1891-1949). This painting depicts a flapper era naked woman wearing only a coat with fur collar, stockings and shoes. Presented in a simple frame with pale blue matte that compliments the colors in the painting. The watercolor is signed and comes from a Russian Antique Store in the Soviet Union.

CONDITION: Excellent condition. Depending on your decor and personal style, the painting may warrant reframing.

Konstantin Ivanovich Rudakov was born March 22, 1891 in St. Petersburg, Russia into a family of an artist/decorator of the Mariininsky Theater. In 1903 he entered the school of A.P. Kopilov. As Konstantin himself says, his interest in art developed at a very early age. While in his final years of school, he was brought to Tsarskoe Selo (Pushkin) to see a famous painter and pedagogue Pavel Petrovich Chistiakov. Following Chistiakov’s suggestion, Rudakov began to systematically work at drawing and painting in the private studio of V.E. Savinsky. At the same time he began attending a new art studio under the supervision of B.M. Kustodiev, E.E. Lansere, and M.V. Dobuzhinsky.
In 1913 Rudakov began studying in the department of architecture of the Higher Art College, which was part of the Academy of Arts. In a year, he began his painting studies in the studio of Professor D.N. Kardovsky. Rudakov’s began supporting himself through his art as an illustrator on various periodicals and illustrated books. In 1923 his work began to be seen regularly in magazines like “Begemot,” “Smehach,” “Pushka” and in the evening editions of “Krasnaia Gazeta.”
Based on the experience he gained during that period, in 1928-1932, Rudakov produced a series of watercolors, lithographs and monotypes using the NEP (New Economic Program) as the common theme. Concurrently with the series on the NEP, Rudakov worked on a collection of watercolours under a single title “Zapad” (The West) which represented a cycle of open interpretations inspired by the works of French painters of the late 19th and early 20th centuries. Because Rudakov contributed his own feelings in those improvisations, new subjects with independent emotional content were born. The series “Zapad” represents a novel program of dynamic perceptions of life by a painter. It is not by accident that Rudakov used the works of Van Gogh for his interpretations. While working on this series, Rudakov rejected the restrictions of direct visual perception. He established for himself the worth of a united image based on a realistic analysis of a nature.
In the middle of 1920s, beginning of 1930s, Rudakov painted several portraits of women and children in which a lyrical side of his talent was uncovered. In his lyrical-romantic images, the painter portrayed the innate value of the uniqueness of the individual. In the 1920s Rudakov began doing graphic design, primarily illustrations for children’s books.
From the beginning of the 1930s, book illustrations became the artist’s primary creative interest. The beginning of his intensive work in this area was a result of the burgeoning Soviet book publishing industry. The painters of that time were responsible for creating new, contemporary book designs and illustrations. Many Soviet painters were involved in this, including V.A. Favorsky, Sergey Gerasimov, V.V. Lebedev, N.A. Tyrsa, A.F. Pahomov, A.I. Kravchenko, E.A. Kibrik, D.A. Shmarinow and others. Rudakov took an honorable place among those painters.
This publication was prepared based on an article by E. N. Litovchenko, “Konstantin Ivanovich Rudakov: Remembering a painter” (“Hudozhnik RSFSR” 1979). More information also available at: russkialbum.ru/e/enc/50_more1.shtml