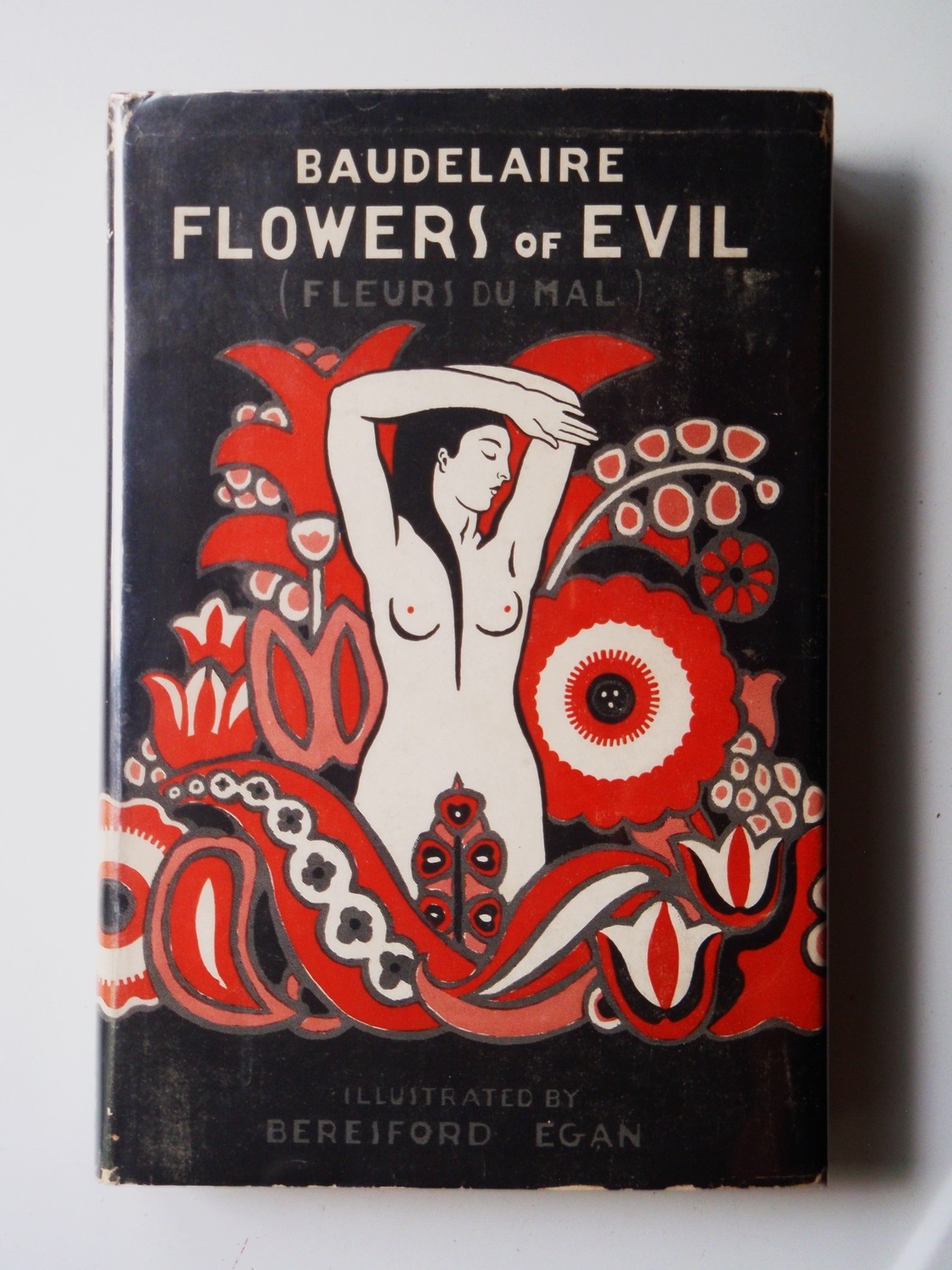 It was important in the symbolist and modernist movements. The subject matter of these poems deals with themes relating to decadence and eroticism. This is the only copy that I've come across that retains its original dust jacket. Godwin books from the "Famous Classics of Love" series.

CONDITION: Superb condition in its original sleeve. Book and sleeve in excellent condition. Minor wear to top of sleeve spin, now covered in plastic. VERY rare to see this book at all let alone with its original cover.

His most famous work, Les Fleurs du mal (The Flowers of Evil), expresses the changing nature of beauty in modern, industrializing Paris during the 19th century. Baudelaire's highly original style of prose-poetry influenced a whole generation of poets including Paul Verlaine, Arthur Rimbaud and Stéphane Mallarmé among many others. He is credited with coining the term "modernity" (modernité) to designate the fleeting, ephemeral experience of life in an urban metropolis, and the responsibility art has to capture that experience.

Baudelaire is one of the major innovators in French literature. His poetry is influenced by the French romantic poets of the earlier 19th century, although its attention to the formal features of verse connects it more closely to the work of the contemporary "Parnassians". As for theme and tone, in his works we see the rejection of the belief in the supremacy of nature and the fundamental goodness of man as typically espoused by the romantics and expressed by them in rhetorical, effusive and public voice in favor of a new urban sensibility, an awareness of individual moral complexity, an interest in vice (linked with decadence) and refined sensual and aesthetic pleasures, and the use of urban subject matter, such as the city, the crowd, individual passers-by, all expressed in highly ordered verse, sometimes through a cynical and ironic voice. Formally, the use of sound to create atmosphere, and of "symbols" (images that take on an expanded function within the poem), betray a move towards considering the poem as a self-referential object, an idea further developed by the Symbolists Verlaine and Mallarmé, who acknowledge Baudelaire as a pioneer in this regard.

Beyond his innovations in versification and the theories of symbolism and "correspondences", an awareness of which is essential to any appreciation of the literary value of his work, aspects of his work that regularly receive (or have received) much critical discussion include the role of women, the theological direction of his work and his alleged advocacy of "satanism", his experience of drug-induced states of mind, the figure of the dandy, his stance regarding democracy and its implications for the individual, his response to the spiritual uncertainties of the time, his criticisms of the bourgeois, and his advocacy of modern music and painting (e.g., Wagner, Delacroix) [Wikipedia]

Beresford Egan (1905 - 1984) was a satirical draughtsman, painter, novelist and playwright. He was born in London but raised from the age of five in South Africa, where he was educated. He returned to London in July 1926 after spending two years as a precocious sports cartoonist on the Rand Daily Mail in Johannesburg.

Egan is remembered as the rare original British exponents of art déco. He was one of the most famous people of London's bohemian scene for nearly five decades. His career graph was phenomenal, beginning with The Sink of Solitude, the dazzling debut which was a satire on the banning of Radclyffe Hall's controversial novel The Well Of Loneliness (1928). That book marked the beginning of a prolific phase of around six years du which Egan created numerous illustrations and book covers for works of Aleister Crowley, Pierre Louÿs and Charles Baudelaire. Egan was also a writer, and wrote a couple of novels, which he embellished with his wonderful illustrations. He also made illustrations for the monographs made by his wife Catherine Bower Alcock. [Wikipedia]

In later life he appeared as an actor in films.