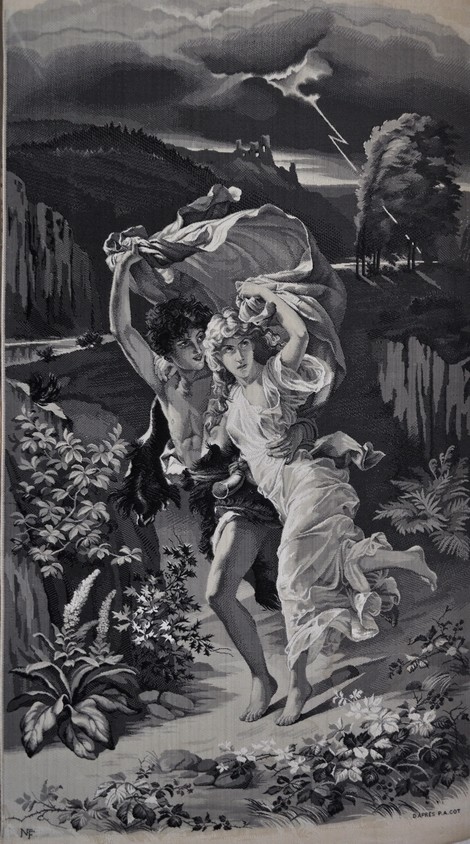 CONDITION: Perfect. No flaws, stains, odor or damage.SIZE: 14 3/4" tall x 7 3/4" wide.History of Neyret Freres from a descendant: In 1825, M. Antoine Bizaillon created a company to make woven ribbons in St Etienne. As he only had young children, when he retired he sold his company to his nephew, Jean-Baptiste Neyret (1825-1889), who was working with him. At that time it was only a small company and there were many in St Etienne.In a few years Jean-Baptiste Neyret changed the company to a higher level. He understood that in the textile industry, the danger was the uncontrollable fluctuations of the ladies fashion. So he changed the activity of the company to more permanent products such as special ribbons for official decoration, trade mark images for manufacturers on their clothes etc... I don't know when they moved into artistic image products and complementary items.Jean-Baptiste Neyret was so successful that he became very rich. In 1860 he decided to invest in other industrial activities. As he was enthusiastic for the potential of the new hydraulic energy, he created, along with the engineer Casimir Brenier a big factory in Rioupeyroux near Grenoble to make paper. The hydraulic turbine had a power of 800 HP, which was a record at that time. Nowadays that factory is an aluminium factory belonging to Pechiney, but the company has conserved as a historical museum the original hydraulic turbine and the 24m high steel tubes bringing the water from the mountain. In these factories Jean-Baptiste Neyret created a special social fund to help workers in case of illness, retirement or other big family problems.After Jean Baptiste's retirement the Neyret Frères company was ruled by Joseph Neyret (1858-1944) my grandfather and the Rioupeyroux factory by Jean Neyret, my grand uncle. Note that Jean sold this Company to a steel milling company called "Acièries de Firminy". He became chairman of that company. He was there at the origin of the decision to build a new steel milling factory near the sea-side, in the Dunkerque area. 100 years before everyone else, he had understood the importance to have an easy and cheap procurement of the iron ore from Africa or others countries.To illustrate the influence of the Neyret family at that time, during several years the "business court" in St Etienne was ruled by Jean-Baptiste as chairman, also by his father in law André Merliie, and his son and son in law were judges! Joseph was also a successful manager. He was reputed to be very generous, and helped a lot of people (nephews or others) to establish themselves. [ source: Stevengraph.com | information from: Charles Neyret ]