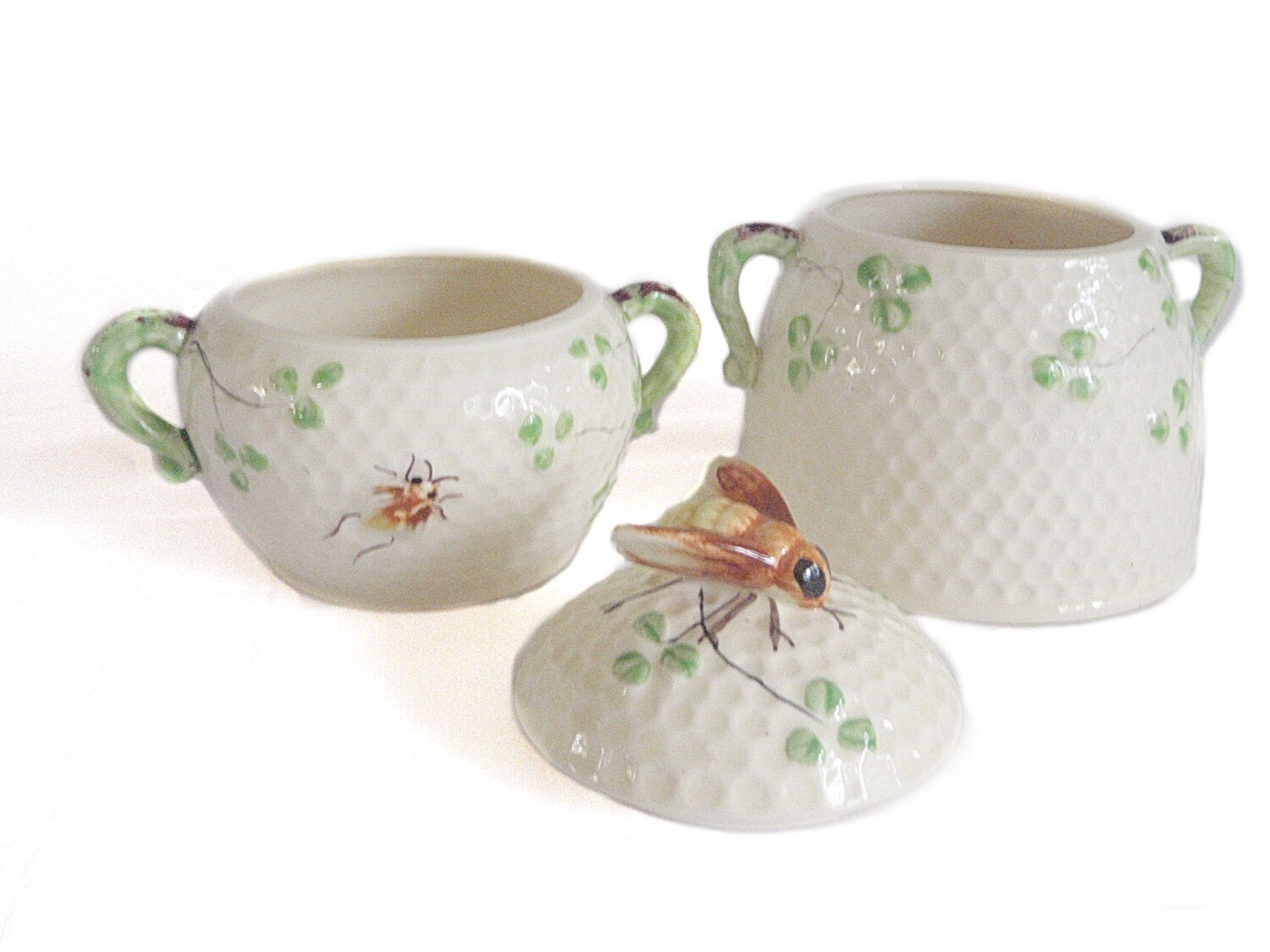 A rare ESD Lefton Japan honeycomb and bumble bee open sugar bowl and covered, lidded jar with honey bee finial. Decorations on honeycomb all hand painted and decorated with faux Belleek with green shamrocks collectible retro kitchen home decor. Can be used for sugar, jam or condiments. Larger bowl signed Japan and smaller has the ESD black stamp. I also have an matching salt and pepper shaker on a little tray another large lidded cookie jar.

Buyer responsibilities: While I do my best to describe any potential flaws with equal attention to an items attributes, please use the zoom feature to examine the item to make a determination if this meets your standards for previously used / loved vintage and antique items being offered.


ESD was a distributor for SOME of Lefton's products but there is no known connection other than that between ESD and Lefton. ESD did sell some Lefton items - but not all. And not all ESD sold was sold by Lefton.

Giftcraft is another example of a distributor that sold the same things in Canada as Lefton sold in the US .

ESD is Enterprise Sales and Distributing headquartered in Toronto Canada (thus the Enterprise Exclusive labels). The owner was a friend of Mr. Lefton and was allowed at one time to "piggyback" on Lefton orders so that Lefton could order larger quantities and both companies would get better pricing from the Japanese manufacturer.

The Lefton mark can be found on a wide array of pottery, porcelain , and glass imported into the United States by the George Zoltan Lefton Company. The company was founded by this new immigrant from Hungary after he arrived in Chicago, Illinois in 1939 and established the company in 1940. George Lefton had previously worked in the clothing and sportswear industry, but he was a collector of fine porcelain and dreamed of entering that business. America offered the backdrop for even a new immigrant into the country to have a chance at commercial success. George Zoltan Lefton had always admired the quality and workmanship in finer Japanese and oriental porcelain, and after the end of World War II he pursued business relationships in post-war Occupied Japan to export Japanese porcelain to America through his company. George was one of the first American businessmen to enter post-war Japan. Early Lefton china was imported into the U.S. with a "Made in Occupied Japan" mark, used in the years immediately following World War II commencing in about 1946 1947. While not comparable to the best wares of European or Chinese porcelain manufacturers, Japanese porcelain was still of good quality and was produced at a cost that made it affordable for the average American family in the post-war years. The export of china and ceramics was a key contributor to the emergence of Japan from the destitution of the war years and the re-invigoration of their economy.

Some of the items manufactured during that period are quite rare today. Mr. Lefton held his quality specifications high, therefore his items will be in high demand for a long time to come. His reputation earned him the name "China King". Until the mid 1970's, Japan was the main source of Lefton's pieces. Sources in Japan changed, which caused Lefton to look for other factories and suppliers. Some of them were Taiwan, Malaysia, and China. The majority that are sold in the secondary market were made in Japan.