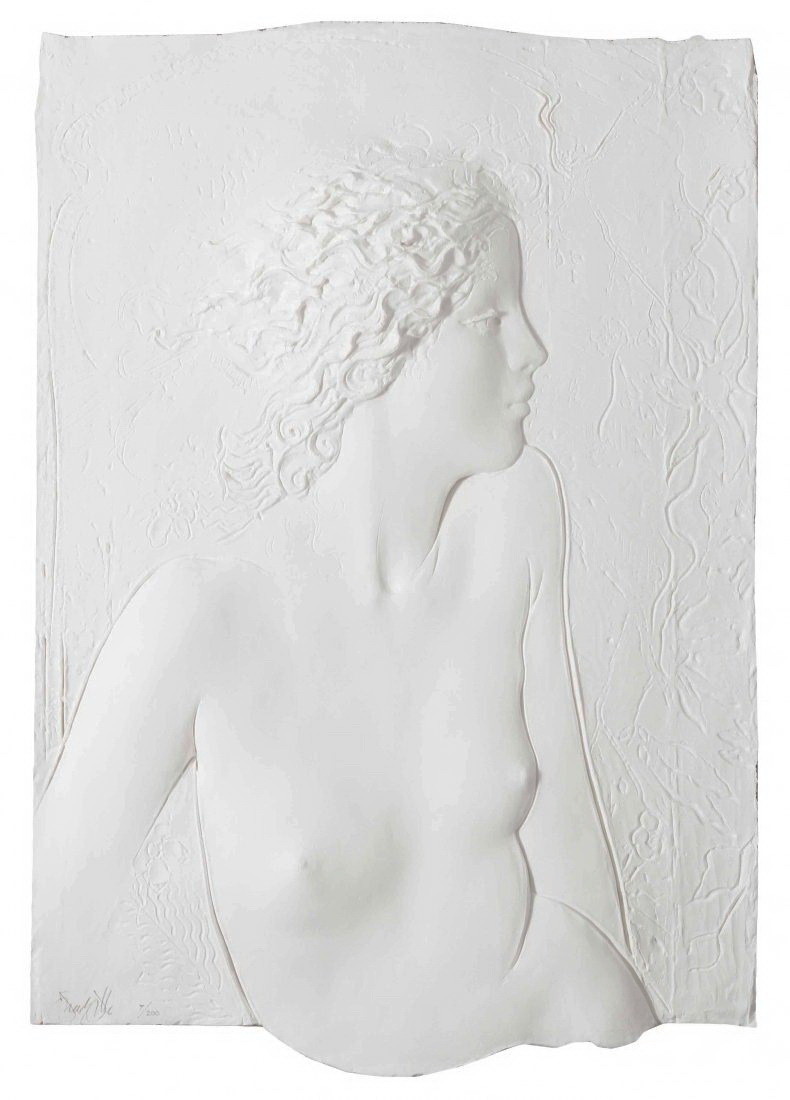 Frank Gallo listed artist (American, b. 1933) Innocence Nude Cast Paper Relief Art Plaque. c. 1980s and a limited edition of 200 of which this is #7 or 7/200. Signed on the lower left with edition number. Mounted on linen with the original lucite shadowbox frame. * Shipping will be determined by destination and method chosen. Must include insurance, tracking and signature card.
SIZE: Artistic nude is 33" x 23" x 3 ". Lucite and wood framed size is: 40" x 30" x 4 1/2" if you want to get an idea of shipping and insurance to your area. As way of example, from Toronto to Florida would be approx. $345.00 Cndn because UPS calculates the size as 80 lbs!!
CONDITION: Original shadowbox plexi frame. Good vintage condition. No damage or repairs.
"I'm obsessed with the female figure ....I'm interested in the beauty of the female figure, and I'm trying to express it, the way I feel it." Frank Gallo
"The properties of light and reflectivity are what started me in plastics and eventually lead me to paper". (In recent years Frank Gallo has worked in cast paper which he regards as the ultimate, economical plastic material. Plastics are noxious health hazards. What would appear raw or harsh in bronze or stone, translates into feathery atmospheric gestures in the whiteness of paper).
Frank Gallo was born in Toledo Ohio, in 1933. He studied art from 1951 to 1959 at the University of Toledo, Cranbrook Academy of Art, Bloomfield Hills, Michigan and the State University of Iowa. and from 1960, was professor sculpture at the University of Illinois.
In the late 1950s, he began to use the material polyester resin reinforced with fiberglass that gives his sculpture a viscous finish. Although he is noted for his studies of women, some of whom are fancifully and colorfully clad, Gallo has also made sculptures of men, including Abraham Lincoln.
Frank Gallo’s commissions include: Portrait of Daniel Pope Cook; Seven life size concrete figures, Bicentennial Commission, Champaign IL; Stained glass wall, Harry Thoroue and Portraits, String Teachers of America.
Museum exhibitions include, The Whitney Museum of American Art Annuals 1964-1967 and Young America, 1965; Alliance on Art, Smithsonian Institute, Washington DC 1968; Venice Biennale, 1968; Works on Paper, Art Institute of Chicago, 1978; and Frank Gallo Retrospective, Paine Art Center, Oshkosh WI, 1983.
Awards include: Guggenheim Foundation Fellowship, 1966 and Best Illustrator of the Year, Society of Published Designers, 1979.
Frank Gallo’s work is discussed in the following books among others : Contemporary American Realism since 1960; Goodrich, Young America/Thirty American Artists Under 35, 1965; Volker Kahmen, Eroticism in Contemporary Art 1972; Mathew Baigell, Dictionary of American Art 1979; Harold Osborne, The Oxford Companion to Twentieth Century Art 1981; Frank Goodyear, Contemporary American Realism 1981; Paul Cummings, Dictionary of Contemporary Art 1987; Edmund Burke Feldman, Varieties of Visual Experience 1987; Virginia Mecklenburg, Modern American Realism 1987; Les Krantz, American Artists: Glenn B Opitz, Dictionary of American Sculptors 1984; Illustrated survey of Leading Contemporary Americans 1985; and Ray Davenport, Davenport’s Art Reference 2005.
Save this product for later
Display prices in: CAD