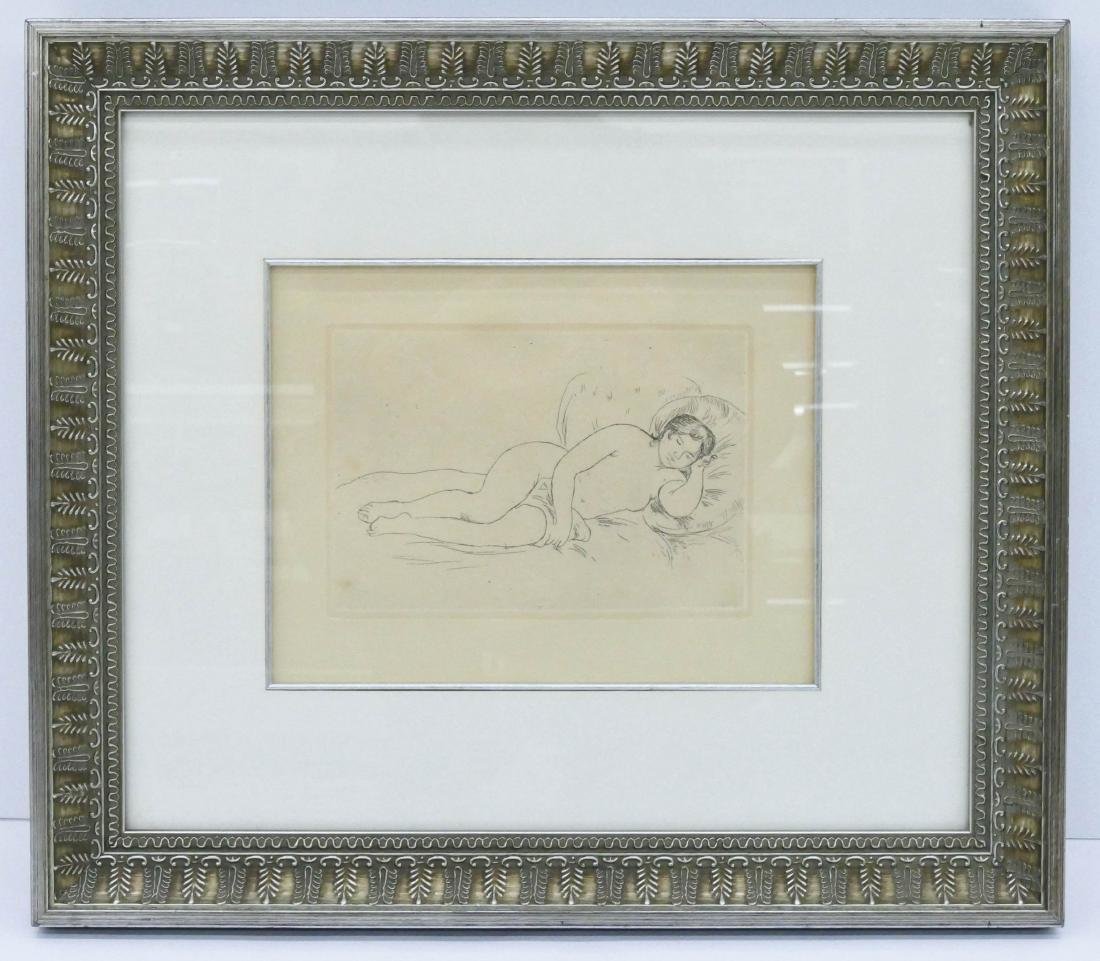 Pierre-Auguste Renoir Femme Nue Couchee drypoint etching c. 1906. Professionally framed in a period art nouveau frame. Considered the 'father' of Impressionism, Renoir was also an engraver and print maker. Between 1890 and 1910, only 59 different images consisting of etchings, lithographs, and drypoints were created by Renoir. There are varying editions of each original etching; never again will another be indited. This is the first impression. More vintage and antique Paintings and Illustrations

About the Edition: The first plate has a very smooth line of the drypoint; the second is unadorned, like a working drawing; the third has the vibrant quality of an etching. Renoir used etching and drypoint as a means of enhancing the willowy curves of the model’s very real body, but managed to avoid the excesses of fashionable prettiness characteristic of so many fin de siécle artists. Here is another example of the artist, starting with one and the same motif, has created works that are diametrically opposed in terms of technique and yet achieve similarly harmonious results. The luminosity and flowing curve of the body are suggested in the one case by feathery drypoint incisions, in the second by the vibrant purity of the etched line, and in the third by small separate hatching stroke’s in the manner of the Venetian etchers or of Manet.

Pierre-Auguste Renoir is considered as the father of Impressionism. Master painter and print maker, he is probably the most popular, well-known artist from the Impressionism era. In 1859, he moved to Paris to study painting at the renowned School of the Beaux Arts, where he befriended Claude Monet and Alfred Sisley. He was the only Impressionist accepted into the juried exhibition, Le Salon, a total of five times. He subsequently took part in the first exhibition of the Impressionists in 1874, along side of Monet, Manet, Pissarro, Sisley, Berthe, Morisot, and other famous Masters.

Renoir traveled around Europe in search of knowledge and inspiration from the old Masters, such as Rubens, Ingres, Raphael, and Rembrandt. He was particularly drawn to their use of color as the defining element that rendered light and structure within a painting. Renoir, even though he possessed the ability that would have allowed him to distinguish himself as an engraver, had grown up with a paint brush in his hand and had concentrated painting. Therefore, his etchings are significant in their rarity. He played a key role in the production of his etchings. He was involved to the degree of being the creator for the fabrication of every impression, inking, and pressing. Between 1890 and 1910, only 59 different images consisting of etchings, lithographs, and drypoints were created by Renoir. There are varying editions of each original etching; never again will another be indited.

To Renoir’s mind, the arts were one. To paint was to exercise a natural faculty. He painted out of a need to paint, for self-gratification and enjoyment. As an Impressionist, he had a profound knowledge of drawing. As a man, he became one of the greatest artists of our time, as an artist he became a Master.