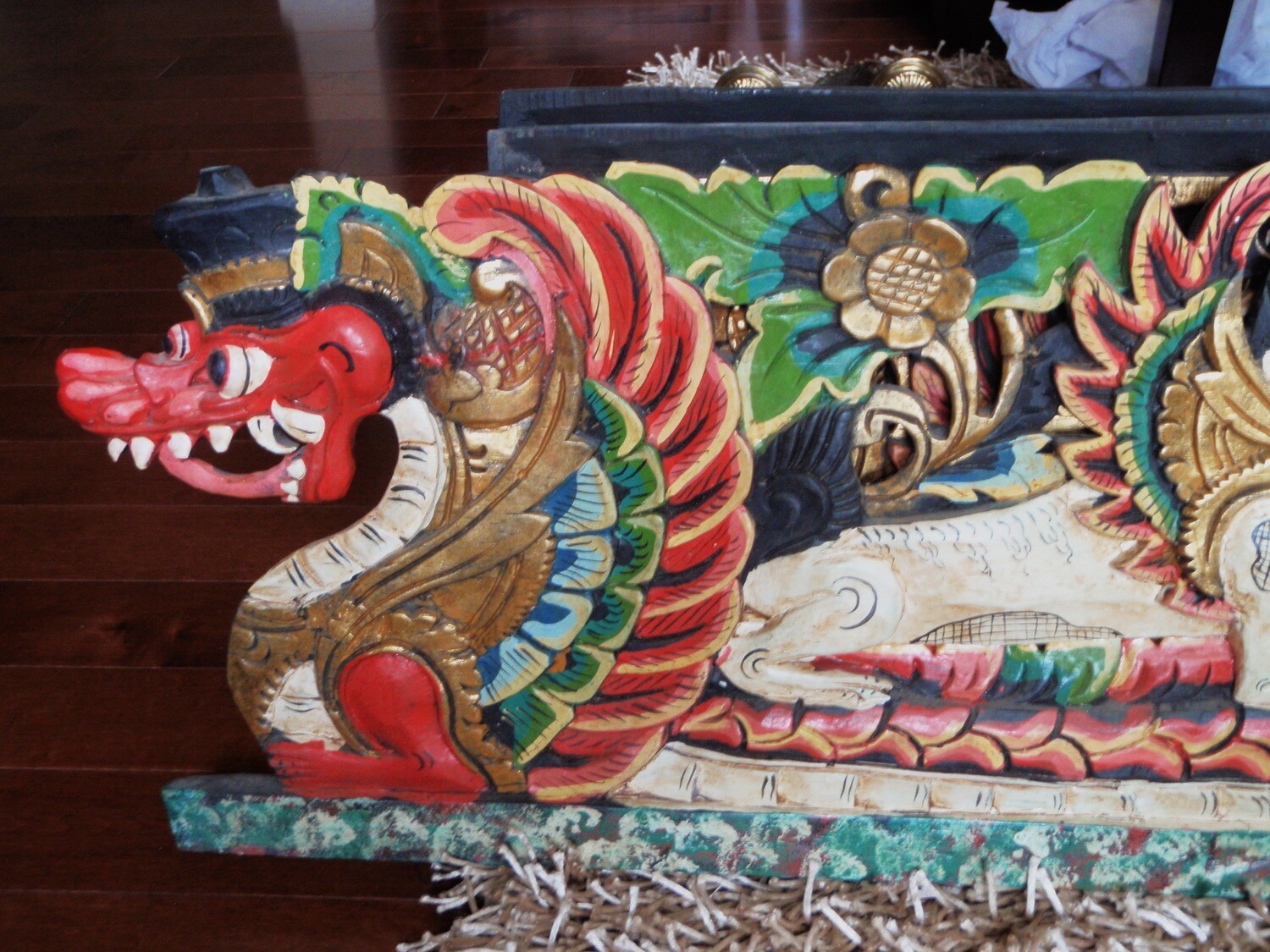 Vintage, one of a kind Balinese hand carved architectural wood panel depicting a motif from the immortal Hindu tale of the Ramayana. This piece of art is has open cut mythological creatures very large ( 79 inches long) and beautifully detailed traditional temple panel. Hand carved by talented artisans in Bali using traditional, age-old techniques and hand tools passed down from father to son. The colors are vibrant and bold, with gold leaf accents. Hang it over a door or window, use it as a head board or just a wonderful folk art piece of art anywhere in your home. IMPORTANT: Will have to be crated and quoted and you can make your own plans. Pick up in Ontario, Canada is available convo me. I have three panels available.

A Brief Outline of the Plot of Ramayana is the immortal tale of Shri Rama that teaches us the values of ideology, devotion, duty, relationships, dharma and karma.

Rama, the prince of Ayodhya and his wife Sita are the ideal royal couple. Rama is brave, wise and dutiful, and Sita is beautiful, generous and saintly.
Sita gets introduced to Rama at a ceremony called ‘Swayamvara’, organized by her father Janaka, the king of Mithila to identify a suitable bridegroom for her lovely daughter. Princes from various kingdoms are invited and challenge to string a giant bow. Only the mighty Rama could lift the bow, string it and even break it into two halves. This leads Sita to garland Rama as her husband.

Dasharatha, the king of Ayodhya, had three wives and four sons. Rama was the eldest and his mother was Kaushalya. Bharata was the son of his second and favorite wife, Kaikeyi. The other two were twins, Lakshmana and Shatrughna from his third wife Sumitra. While Rama is all set for coronation, his step-mother, Dasharatha’s second wife, Kaikeyi, wants her son, Bharata, to become king. Before the aged king could hand over his crown to his eldest son Rama, Dasaratha is destined to die. And instead of being crowned king of Ayodhya, Rama is sent into exile in the forest for fourteen year by an intrigue in the palace and a quirk of fate.

Rama is Banished for Fourteen Years

Rama goes to the forest, accompanied by wife Sita and brother Lakshmana, and they live as recluses among the hermits that lead a life of meditative retreat in the deep woods. Bharata, whose mother's evil plot won him the throne, goes to meet Rama in the forest and pleads him to return to the capital. As Rama declines to break his vow given to his deceased father, Bharata is compelled to go back to Ayodhya with his sandals, which he places on the throne as the symbol of Rama’s continuing monarchy.

While Rama, his wife and brother are living a simple yet happy life in the forest, tragedy strikes! Henceforth, the plot revolves around the abduction of Sita by the demon king Ravana, the ten-headed ruler of Lanka, and Rama’s pursuit to rescue her, aided by Lakshmana and the mighty monkey-general Hanuman. Sita is held captive in the island as Ravana tries to persuade her to marry him. Rama assembles an army of allies comprising mainly of monkeys under the brave Hanuman. They attack Ravana’s army, and after a fierce battle, succeed in killing the demon king and freeing Sita, reuniting her with Rama.

After fourteen years, Rama and Sita return to Ayodhya and are warmly welcomed back by the citizens of the kingdom, where they rule for many years, and have two sons – Luv and Kush. Unfortunately, Sita’s chastity during her period of capture by Ravana comes under scrutiny, and she has to go through trial by fire to prove her purity. But queen, who emerged from the earth at her birth, invokes Mother Earth to take her back into the earth, and the saintly Sita returns to her Mother, never to reappear again.
Read the Detailed Summary & Full Text of the Ramayana