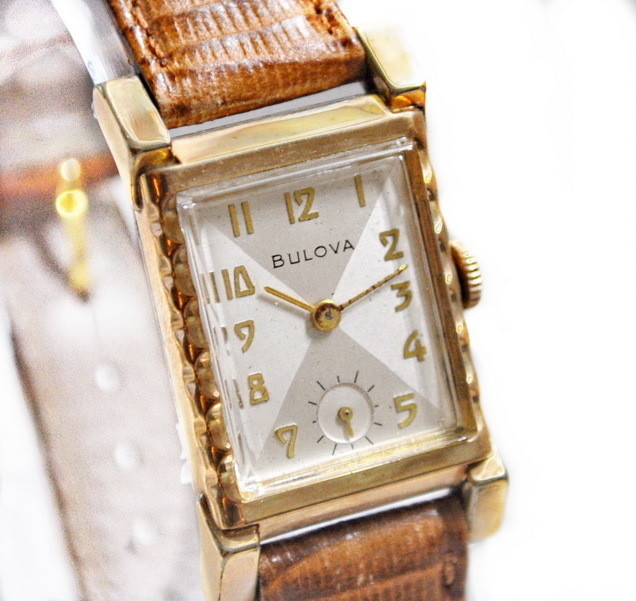 c. 1950's Bulova Wristwatch with Scalloped Case and hour glass two-tone dial one of the Academy Award 'P' watch. A watch for men or women with a nicely scalloped or pie-crimpled 10kt gold plated case. The two-tone hour glass dial adds great style with raised gold hour markers, minute hands and aux. seconds at 6 o'clock. This manual wind, 21 jewel, 7AA Bulova movement is signed, as is the dial and crown (triple signed). Fitted with a new genuine leather strap and matching gold tone buckle and ready to wear.CONDITION: The condition is excellent. The watch is running well and keeping time but will need a service as its been sitting. The crystal is excellent with only fine age appropriate wear. . There is very light soil under bezel cover.SIZE: Nice full size watch measures 38mm lug to lug and 22mm wide without crown.In addition to being available to the general public, these were apparently given out to the nominees in the early 50's. I decided to wear this today, as I haven't in a while. Keeps excellent time and is almost 60 years old... I will have to take a picture of the Original Bakelite "Oscar" Stage CaseIn 1949, academy director Margaret Herrick authorized a four-year contract with Bulova watches for the film organization's first commercial license. The manufacturer paid the academy $145,000 (a little more than $1 million in 2007 dollars) to create an exclusive line of Academy Award watches.Leveraging Oscar"The academy was a very hand-to-mouth organization at the time," said Davis of the choice to leverage Oscar. "And all that money went to paying off its headquarters, which was then on Melrose. But more importantly, the license with Bulova meant that it would be in Bulova's best interest to fight off infringements with its own legal department, which was significantly larger than the academy's. So they believed that this would finally put an end to all the illegal products out there."But when the company began running ads touting that its Academy Award watch had a "winning" design, the academy charged it with "perpetrating a fraud" on the public.Arguing that Oscar's symbolic value had been diminished because people would assume that Bulova had earned an Oscar for "best watch design," the academy aligned with the Federal Trade Commission to break its contract with the company two years early. (Some of those watches now appear on EBay selling for as much as $2,500.)Read more: http://www.watchophilia.com/photogallery/bulovas-1950-1959/a1950-academy-award-z/#!