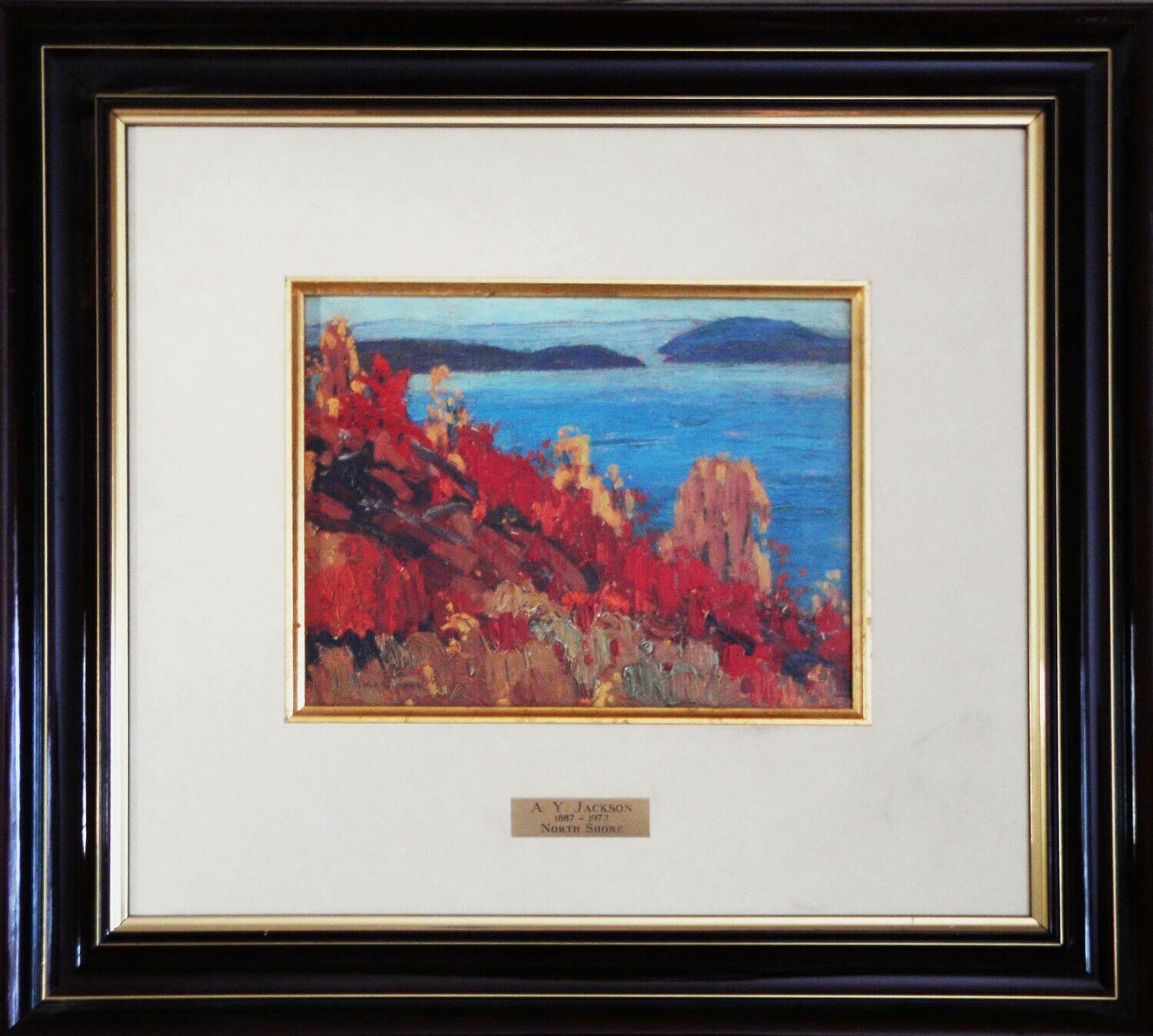 A fantastic and rare A. Y. Jackson oil painting on board entitled Sand North Shore by one of the founding members of the famous Canadian Group of Seven. Re-created brush stroke for brush stroke in a worldwide limited edition of which this is 52 / 460. Dating from the early 1990's and beautifully, professionally framed by Master Editions in a rich mahogany frame, faux suede matte and gold filet. It bears the Phoenix Marque of Authenticity plaque and wax seal.

CONDITION: Excellent vintage without signs of damage or repairs

A. Y. Jackson
From Wikipedia, the free encyclopedia

Alexander Young Jackson CC CMG (October 3, 1882 – April 5, 1974) was a Canadian painter and a founding member of the Group of Seven. Jackson made a significant contribution to the development of art in Canada, and was successful in bringing together the artists of Montreal and Toronto.[1] He exhibited with the Group of Seven from 1920. In addition to his work with the Group of Seven, his long career included serving as a war artist during World War I (1917–19) and teaching at the Banff School of Fine Arts, from 1943 to 1949. In his later years he was artist-in-residence at the McMichael Gallery in Kleinberg, Ontario.

As a young boy, Jackson worked as an office boy for a lithograph company, after his father abandoned his family of six children. It was at this company that Jackson began his art training. In the evenings, he took classes at Montreal's Monument-National.

In 1905, Jackson worked his way to Europe on a cattle boat, returning by the same means and travelling on to Chicago. In Chicago, he joined a commercial art firm and took courses at the Art Institute of Chicago. He saved his earnings and, by 1907, was able to visit France to study Impressionism. In France, Jackson decided to become a professional painter, studying at Paris' Académie Julian[1] under J.P. Laurens. Some of his most important artistic development was at the Etaples art colony, which he first visited in 1908 with his New Zealand friend Eric Spencer Macky (1880–1958). Jackson painted his Paysage Embrumé then and, rather to his surprise, it was accepted by the Paris Salon.[3]:30 Returning in 1912, he stayed with the Australian Arthur Baker-Clack (1877–1955). From this period date the Neo-Impressionist “Sand dunes at Cucq”[4] and “Autumn in Picardy”,[5] which was bought by the National Gallery of Canada the following year.

When Jackson returned to Canada, he settled in Sweetsburg, Quebec, where he began painting works such as the Neo-Impressionist "The Edge of Maple Wood". He held his first single artist exhibition at the Montreal Art Gallery with Randolph Hewton in 1913. Unable to make ends meet and discouraged by the Canadian art scene, he considered moving to the United States. However, he received a letter from J. E. H. MacDonald which changed his mind. MacDonald inquired about The Edge of Maple Wood, which he had seen at a Toronto art show, informing Jackson that Toronto artist Lawren Harris wanted to purchase the painting if he still owned it.

After the purchase, Jackson struck up a correspondence with the two Toronto artists, often debating on topics related to Canadian art. Jackson soon began visiting Toronto. Dr. James MacCallum convinced Jackson to relocate to Toronto by offering to buy enough of his paintings for one year to guarantee him a living income.[6]:24 He moved into the Studio Building which was financed by Lawren Harris, heir to the Massey-Harris farm machinery fortune, and Dr. James MacCallum. Harris, overseeing construction of the building, was too busy to concentrate on his own artistic endeavours and loaned his own studio space, over the Commerce Bank branch at the northwest corner of Yonge and Bloor streets, to the newly arrived Montrealer, A.Y. Jackson. The spot is now occupied by the 34-storey 2 Bloor West. Jackson was a welcome addition to the Toronto art scene, having traveled in Europe and bringing with him a respected - though as yet not particularly successful - talent. The canvas taking shape while he waited to move into the Studio Building, "Terre Sauvage," became one of his most famous. In January 1914 the Studio Building was ready for occupation. Tom Thomson was another of the first residents of the building and shared a studio with Jackson for a year.[6]:24[7] Like the other Group of Seven painters, Jackson embraced landscape themes and sought to develop a bold style. An avid outdoorsman, Jackson became good friends with Tom Thomson, and the duo often fished and sketched together, beginning with a trip to Algonquin Park in fall 1914.[6]:25 Inspired by Thomson, Jackson and the other painters who would one day be known as the Group of Seven undertook trips to Algonquin Park, Georgian Bay, Algoma and the North Shore.

With the outbreak of World War I, Jackson enlisted in the Canadian Army's 60th battalion in 1915. Soon after he reached the front he was wounded at the Battle of Sanctuary Wood in June 1916 and found himself once more at Étaples in the hospital there.[8] While recovering from his injuries, he came to the attention of Lord Beaverbrook.[9]:46 He was then transferred to the Canadian War Records branch as an artist. Here, Jackson would create important pictures of events connected with the war.[10][11] He later worked for the Canadian War Memorials as an official war artist from 1917 to 1919.

On his return from WWI, Jackson again took up residence at the Studio Building. He removed Tom Thomson's easel, made by Thomson's own hand, from his studio and used it for all the subsequent pictures he produced in the Studio Building. Shortly after he returned from wintering on Georgian Bay, he learned that in his absence he had been included in an informal group of Studio Building artists, exhibiting for the first time, called the Group of Seven.

The Beaver Hall Group was formed in Montreal in May 1920 with A. Y. Jackson as president. In his opening speech, Jackson emphasized the right of the artist to paint what they feel "with utter disregard for what has hitherto been considered requisite to the acceptance of the work at the recognized art exhibitions in Canadian centres. "Schools and ‘isms’ do not trouble us", he maintained, "individual expression is our chief concern".[12] He identified its goals as being those of the Group of Seven, and over the years Jackson maintained the contact between Toronto and Montreal, supporting and stimulating the Montreal artists through regular visits and correspondence. He kept them informed of events in Toronto and arranged for their works to be included in the Group of Seven exhibitions.[13] It is through this association he made lifelong friends of Beaver Hall artists Anne Savage, Sarah Robertson and Kathleen Morris.

Jackson left the Studio Building in 1955 with Lawren Harris mourning, in a letter from Vancouver, "Your moving from the Studio Building marks the end of an era, the one era of creative art that has the greatest significance for Canada... You were the real force and inspiration that led all of us into a modern conception that suited this country, and the last to leave the home base of operations."

In 1919, Jackson and six painter colleagues formed the Group of Seven. These artists were considered to be bold, because the Canadian wilderness had previously been considered too rugged and wild to be painted.[14] Although his name is conventionally associated with this group, he would also remain something of a loner throughout his life.

In 1925, he taught at the Ontario College of Art in Toronto; this was the only year that he missed his annual spring trip to Quebec.

In 1933, Jackson helped found the Canadian Group of Painters. Several members of the Group of Seven later became members of this group, including Lawren Harris, A. J. Casson, Arthur Lismer and Franklin Carmichael.

In 1954 he was one of eighteen Canadian artists commissioned by the Canadian Pacific Railway to paint a mural for the interior of one of the new Park cars entering service on the new Canadian transcontinental train. Each the murals depicted a different national or provincial park; Jackson's was Kokanee Glacier Provincial Park.[16] Jackson moved to the Ottawa region in 1955, settling in Manotick.

In his later years, he was often accompanied on his painting trips into the Ottawa Valley region, the Gatineau Hills, the Lievre River Valley and Ripond by friend, painter and former student Ralph Wallace Burton, and fellow painters Maurice Haycock and Stuart D. Helmsley.[17][18] One such venture almost ended in disaster: "...in the 1950s, when Ralph and A.Y. were painting on the banks of the Ottawa River at Deux Rivieres, a bullet ricocheted off a rock where Jackson was sitting."

In 1958, he published A Painter's Country,[19] an autobiography dedicated to the memory of Group of Seven member J. E. H. MacDonald, who "visualized a Canadian school of painting and devoted his life to the realization of it".

In 1964, Jackson submitted his own design during the Great Flag Debate. It was similar in design to the Pearson Pennant.

In 1965, Jackson had a serious stroke that put an end to his painting career. He recuperated at the home of friend and painter Ralph Wallace Burton, and later moved to the McMichael Conservation Estate in Kleinburg, Ontario.[17][22] [23] Jackson died in 1974, over the Easter holiday in a nursing home in Toronto. He is buried on the grounds of the McMichael Gallery.[24] His niece Naomi Jackson Groves published several books about his life and work including Two Jacksons (2000), an account of a shared trip through France and Germany in 1936.