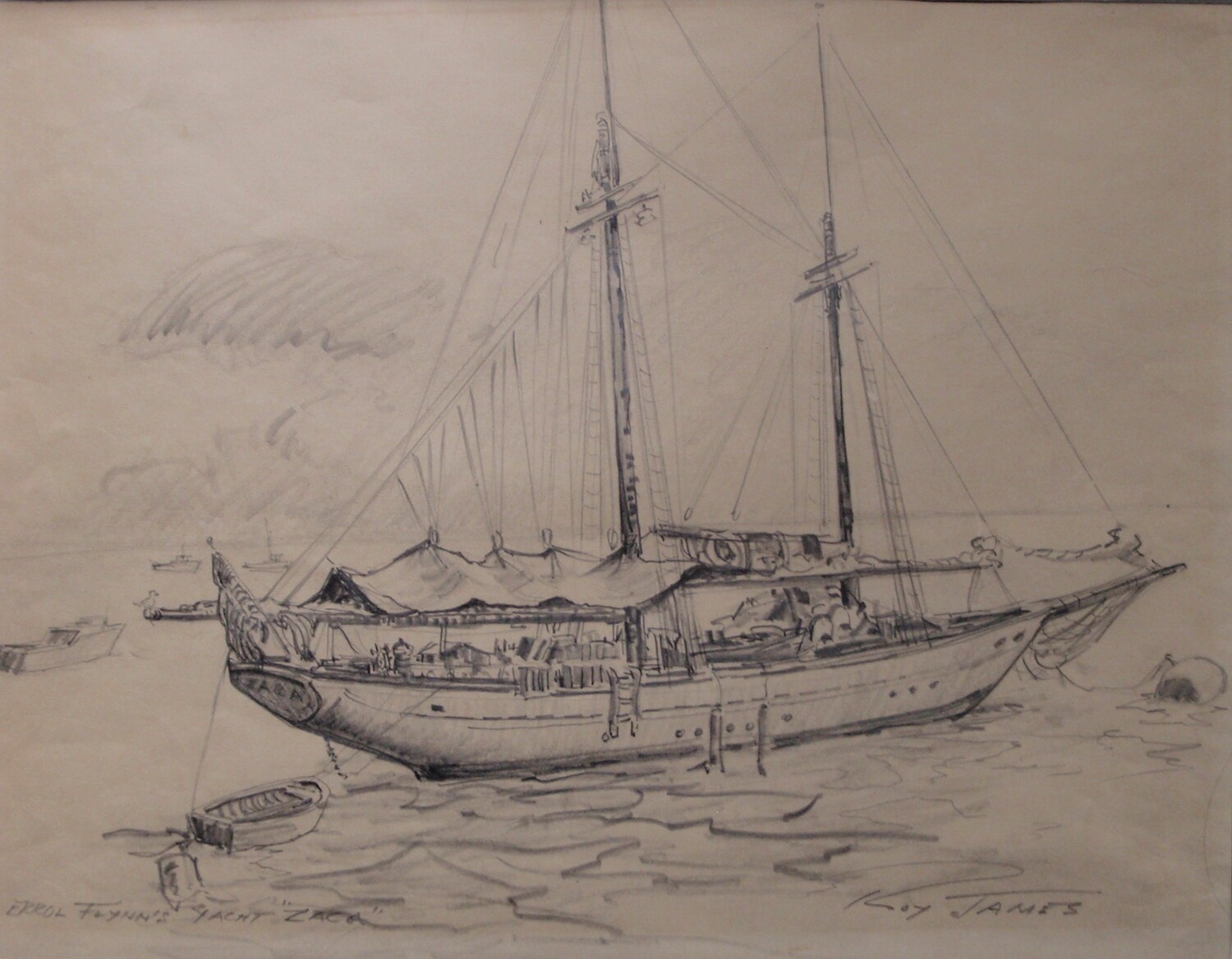 A vintage late 1940's to early 1950's hand sketched original of Errol Flynn's sailboat the Zaca by Roy James. Its a beautiful signed rendering of the majestic yacht dedicated and signed by the artist. Pencil on sepia paper matted and ready to frame.

Errol Flynn was, among many of his accomplishments, a master sailor. He loved his yacht Zaca and lived on it for a time. He also took his sailboat on an oceanographic expedition featured in one of the links below. The Zaca was featured in the Orson Welles film The Lady from Shanghai with the beautiful Rita Hayworth. There is a history of the Zaca below which includes her christening by actress Marie Dressler, the schooner also doing service for the Navy in WWII and more:

It’s a storied yacht born in the Bay Area whose 20th century voyage was filled with more tales than most fleets see in a lifetime — and whose exploits were covered in great depth in The Chronicle.

The Zaca was financed by Templeton Crocker, a banker who spared no expense on his dream boat. Of course, this wasn’t a problem, because his Crocker-Anglo Banks were spread across towns big and small in California in the early 1900s and his grandfather Charles Crocker was one of the country’s beyond-wealthy railroad barons.

The Nunes Bros. Boatyard of Sausalito secured the contract to build the Zaca with a bid of $200,000 in the 1920s, and the work had to be done in a special shed to accommodate the 118-foot hull. Reports at the time pegged the interior’s cost at an additional $100,000 in 1930 — or about the cost of 50 Lamborghinis in today’s dollars.

The Zaca was christened in 1930 by silent film star Marie Dressler. Eyewitness accounts differ on the degree of failure that day, but most agree that Dressler had enjoyed a few glasses of Champagne before the event. When Dressler swung the bottle for luck, according to a Sausalito Historical Society article, she either missed the boat completely; hit it poorly, failing to break the bottle; or swung, missed and fell in the water. Regardless of the truth, it made for a good story.

The Navy bought the schooner, renamed it the USS Zaca (IX-73) in 1942 and enlisted it to patrol the West Coast during World War II. It was decommissioned near the end of the war, but its colorful adventures weren’t nearly over.

Errol Flynn — Hollywood legend, noted Lothario and celluloid swashbuckler — bought the Zaca in 1946. It quickly regained its reputation as one of the world’s most renowned party boats. Soon after, Orson Welles filmed “The Lady from Shanghai” on board, sometimes with Flynn at the boat’s helm.

Flynn was on a trip to Vancouver to sell the Zaca when he died, and the ship ended up abandoned in the south of France. Some even believe it became haunted by Flynn’s ghost, with the sounds of parties long past emanating from the decaying ship.

Spirits and decay didn’t spell the end for the Zaca, however.

In the 1990s, it was rescued and restored by boating aficionado Roberto Memmo, according to sailing magazine Latitude 38. “Memmo brought 50 of the best shipwrights and craftsmen to Brest, France, for a spectacular restoration that lasted 18 months. By the time the restoration was completed in the late ’90s, (it) was one of the most spectacular yachts in the Mediterranean.” - From the Archive CHRONICLE VAULT
BY BILL VAN NIEKERKEN