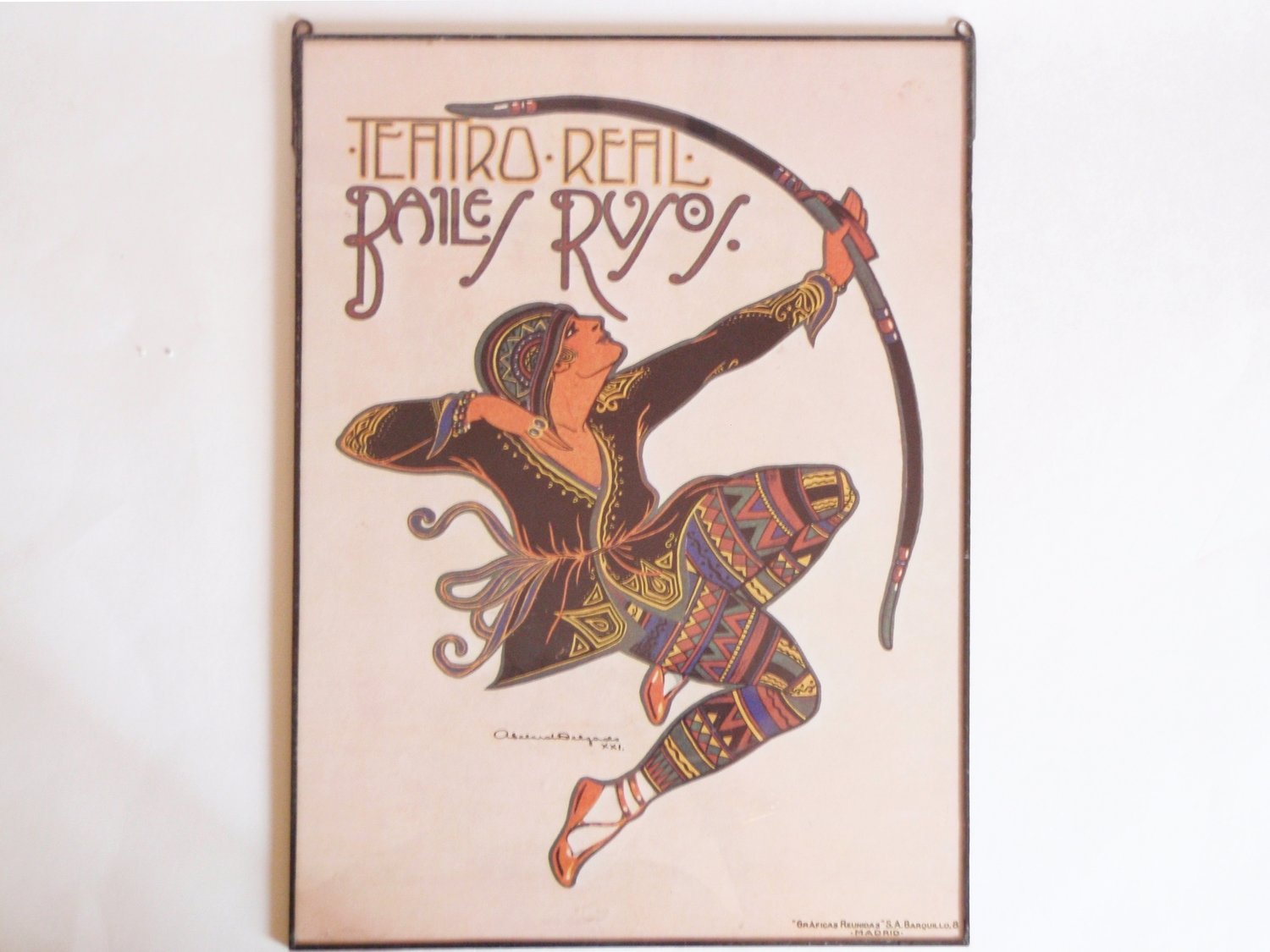 This is a very rare, genuine c. 1921 Teatro Real theater production poster by artist Abelard Delgado entitled Bailes Rusos - Russian Ballet. It depicts a Ballet Ruses dancer in theater costume design but I am not sure what production its from. One source confirmed that it was a Diagelev operatic ballet but did not cite the specific production. It has been custom framed under glass on both sides with much effort taken as it is encased in lead and the two round hangers are part of the design. I am not sure if small to mid-size poster hung in the lobby or window of the Spanish theater Teatro Real. A beautiful cross between the Art Nouveau and Art Deco sensibilities.

CONDITION: Looks to have been encased in glass in a custom made lead from since it was new. Exceptional and original. There is some color variation but it looks to be from time of printing when the ink was laid down. Does not in any way distract.

A long and illustrious history, The Teatro Real is Spain's leading opera house. It is considered to be one of the three most important cultural institutions of the country together with the Museo Nacional del Prado and the Museo Nacional Centro de Arte Reina Sofía.

HISTORY: Origins of the Teatro Real

In 1817, King Fernando VII orders, through a Royal Decree, the remodelling of the Plaza de Oriente and the design and construction of an opera house on the same building spot that had been used by the Real Teatro de los Caños del Peral until the previous year. The first stone was laid in April 1818. The initial design and construction work of the Teatro Real were lead by architect Antonio López Aguado, with long stops and periods of neglect, caused by the lack of funding and the death of the architect (later replaced by Custodio Teodoro Moreno). The works were only completed in 1850, 33 years after their start.

On 19 November of that year, after an expenditure of 42 million reales, the theatre was opened with a performance of La favorita, by Donizetti. During the next seventy-five years, the Real became a major European theatre, where the best voices of the moment came to perform: the tenors Julián Gayarre, Giovanni Mario and Enrico Tamberlick, the soprano Rosina Penco and the famous diva Adelina Patti.

After the revolution of 1868 and the exile of Queen Isabel II, the theatre was renamed as the Teatro Nacional de la Ópera. There are several interesting anecdotes from this period: Parsifal was performed uncut, but with each performer singing in their own language, while La Walkiria was performed translated into Spanish.

In October 1925, a collapse caused the temporary closure of the theatre, and the start of reconstruction works that would extend indefinitely without the Teatro Real being reopened. The Civil War meant that construction work could not be continued, and a powder magazine even exploded inside the building, further complicated building works in the post-war period. [ http://www.teatro-real.com/en/the-theatre/history ]