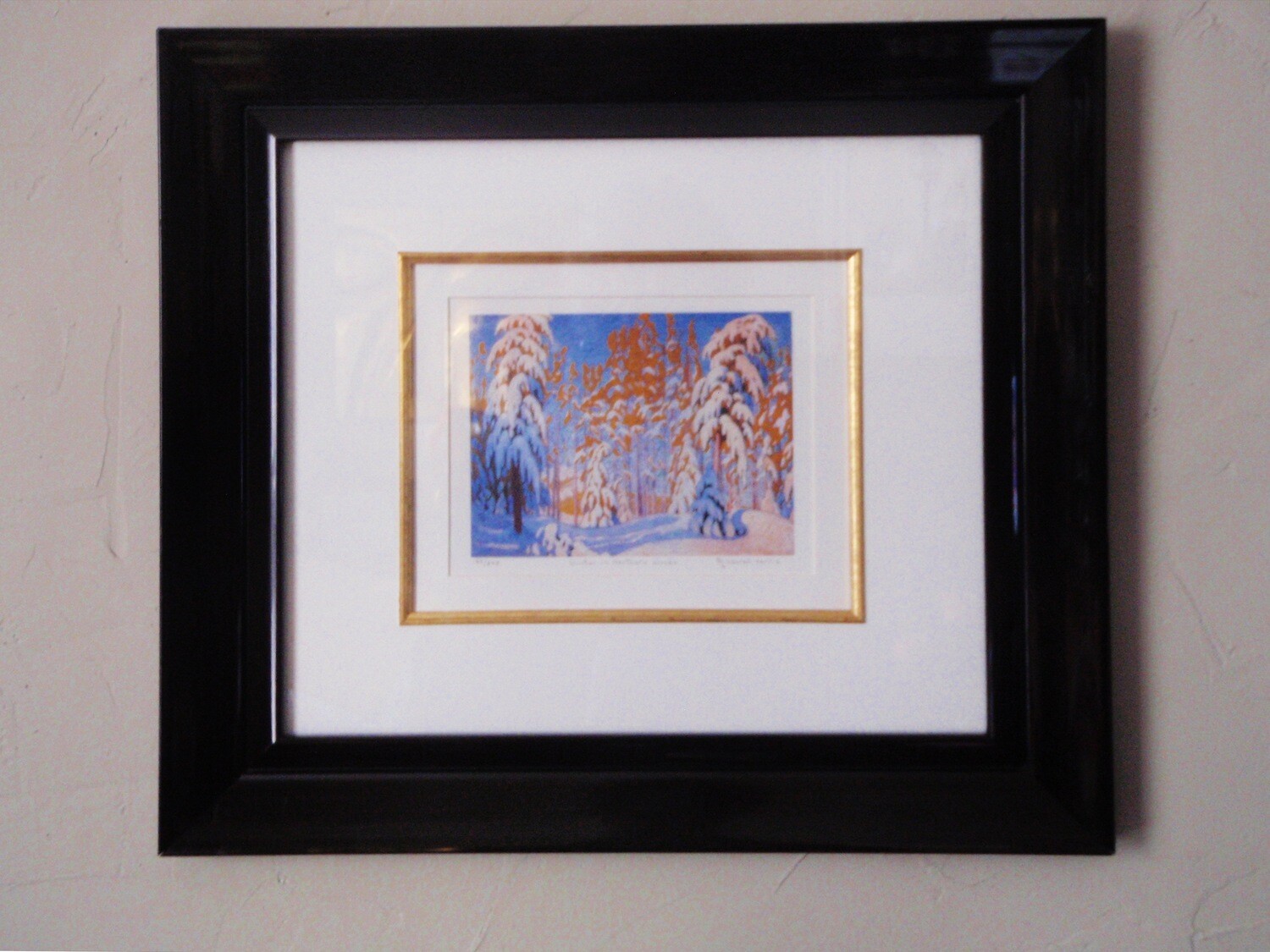 This is a beautifully framed Lawren Harris landscape called Winter in the Northern Woods (at daybreak or sunset.) Number 150 of a limited edition of 345, this is professionally framed with gold fillet and is ready to hang. Lovely color tones that make a dramatic statement against the wide dark frame. Like to others that I have had in my personal collection and long gone, this too is presumably released by the family of Lawren Harris 150/345 who naturally have the rights to his images.

CONDITION: Excellent condition overall - solid and ready to hang. I've noticed that a few of the corners aren't tight.

Lawren Stewart Harris (October 23, 1885 – January 29, 1970) was a Canadian painter born in Brantford, Ontario, who was one of the best known landscape painters of the Group of Seven, a group of artists who painted Canada with great reverence. He pioneered a distinctly Canadian painting style in the early twentieth century.

Lawren Harris was born into a wealthy family on October 23rd 1885. He was the first born of two sons. He attended St. Andrew's College in Toronto, and then from age 19 (1904 to 1908) he studied in Berlin. He was interested in philosophy and eastern thought. Later, he became involved in Theosophy and joined the Toronto Lodge of the International Theosophical Society.

In Toronto, he began painting post-impressionist street scenes of the older and poorer areas of Toronto. He continued to paint similar subjects, both of Toronto and of small Ontario towns, into the 1920s.

Later in 1918 and 1919, Lawren Harris with J. E. H. MacDonald financed boxcar trips for the artists of the group of seven to the Algoma region. Another painting trip after Algoma was to Lake Superior North Shore with A.Y. Jackson (A. Y. Jackson later claimed that Lawren Harris provided the stimulus for the Group of Seven).

By 1919 Harris's landscapes had become increasingly somber and his brush stroke more expressive. Du this period, Harris's landscapes, of Lake Superior (from 1921), the Rocky Mountains (from 1924), and the Arctic (1930), became more stylized. For example, in North Shore, Lake Superior (1926, National Gallery of Canada, Ottawa), forms lose texture, while color and light symbolize the interplay between the spiritual and material.

Harris was so passionate about the North Shore and fascinated by the theosophical concept of nature, he returned annually for the next seven years. There he developed the style he is best known for. Harris’s paintings in the early 1920’s were characterized by rich, decorative colors that were applied thick, in painterly impasto. He painted landscapes around Toronto, Georgian Bay and Algoma.

Du the 1920s, Harris' works became more abstract and simplified, especially his stark landscapes of the Canadian north and Arctic. He also stopped signing and dating his works so that people would judge his works on their own merit and not by the artist or when they were painted.

In 1920 the Group of Seven was formed and began holding almost annual exhibitions of their work in Toronto. The most intellectual of the group, Harris was a great nationalist and an enthusiast who inspired others.

His first trip to the Rockies in 1924 soon became annual, too, for the next three years.

In 1930, Harris’s landscape paintings became simplified as he sailed with A.Y. Jackson aboard a supply ship.

In 1934 Harris moved to Hanover, New Hampshire, then in 1938 to Santa Fe, New Mexico, where he and other artists formed the Transcendental Painting Group. Harris finally left his wife of 24 years, Trixie and his three children and married Bess Housser. Harris was threatened to be charged with bigamy by Trixie’s family because of his actions. Later that year he and Bess left their home and moved to the United States.

In 1940 they moved Vancouver, British Columbia and Harris started his abstract paintings.

In 1969 he was made a Companion of the Order of Canada.

Lawren Harris died in Vancouver on January 29th 1970 as a well-known Canadian artist. To Harris art was “a realm of life between our mundane world and the world of the spirit.”