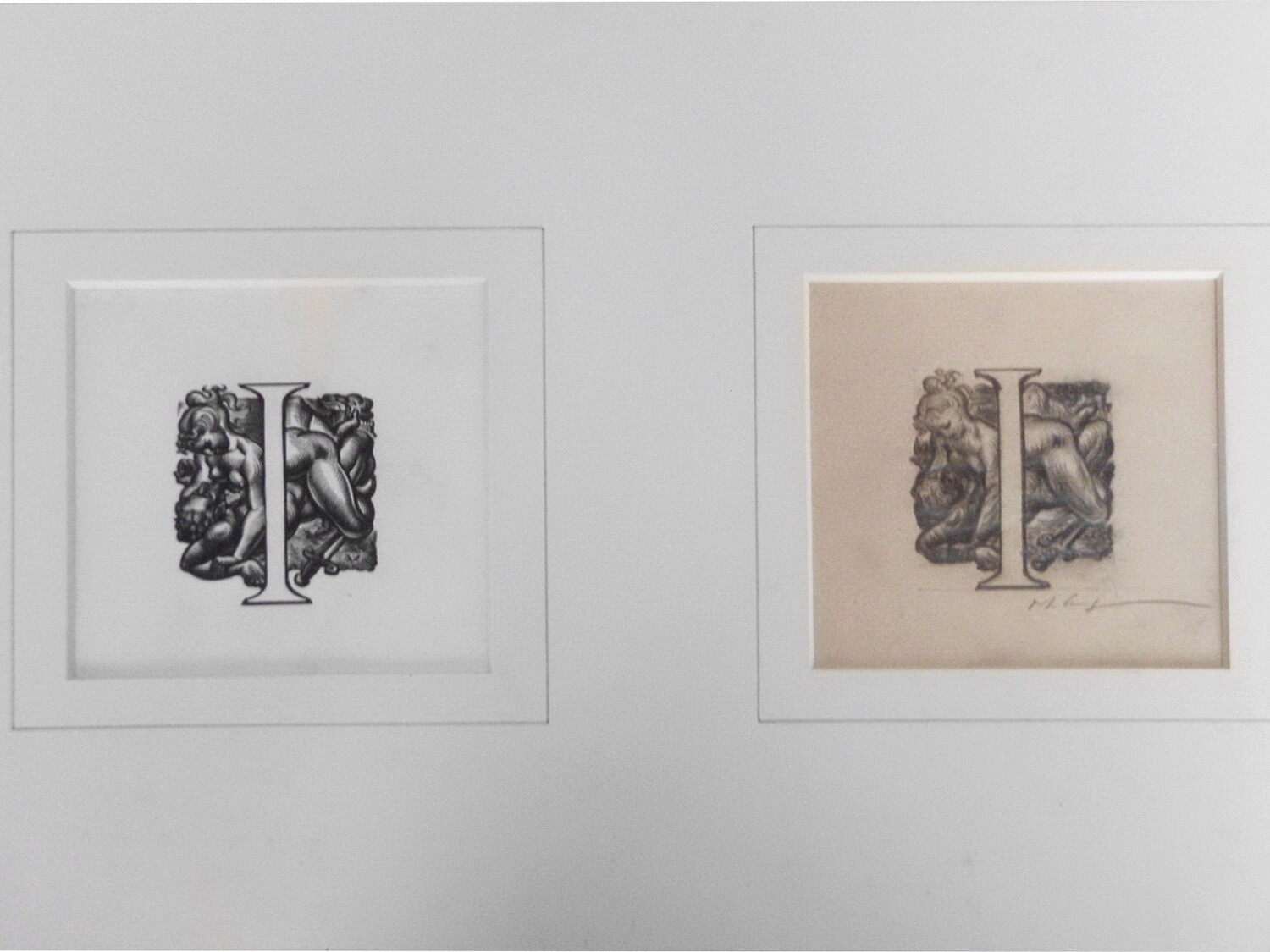 Extremely rare LE CAMPION, VALENTIN (Paris, 1894 - 1955) c. 1935 Erotic Original drawing with Woodcut Engraving of the Letter I with the accompanying Original Signed Graphite Sketch most likely for an illustration. This is truly a fantastic piece which is a take-off of the Joseph Apoux Pornographic Alphabeth from the late 1800's. This particular piece is of the capital letter "I", graphite on paper signed by hand on the sketch and in the block on the etcing. I have another work of Mr. De Campion's of the letter "D". Both pieces are matted and ready to be framed. Super addition to a serious art deco collection.

Ex-libris etchings and woodcuts date all the way back to the mid 15th century. Their function was initially quite utilitarian as plates used to signify the ownership of books. As private libraries and their owners gained more wealth and prestige, however, so did their ex-libris bookplates. Pictorial imagery became as important as the working and the finished work of art came to stand as an owner’s claim to fame. Before long, famous artists were commissioned by wealthy collectors to make their ex-libris art and during the centuries, such great talents as Durer, Holbein, Manet, Toulouse-Lautrec, Le Campion and Rockwell Dent all contributed significantly to this great medium.

The golden era for the ex-libris work of art, however, has been during the twentieth century, most particularly during the Art Deco era of the 1930’s. Collecting of ex-libris etchings and wood engravings reached such a peak during this time that many artists devoted themselves almost exclusively to this area. The Russion Expatriotee and Frenchman, Valentin Le Campion was considered one of the prime ex-libris artists of the Art Deco era. Known as well for his fine illustrative work, Le Campion was in demand throughout the world for his art and engraved ex-libris plates. This original wood engraving, for instance, is one of several prints commissioned by the wealthy Cleveland collectors and publishers, Elizabeth Watson Diamond and J. Edouard Diamond, during the mid 1930’s. It is highly indicative of Le Campion’s classic Art Deco style. His bold rendering for the human figure is seductive curves of lines and tones placed him at the centre of the Art Deco movement. I also have the letter "I" available as well. These are extremely rare and wonderful pieces.

CONDITION: The condition is excellent.