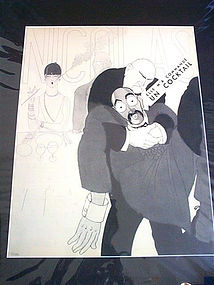 One of two wonderful Paul Irib (1888 - 1935) advertising illustrations c. 30's for the French Winery Nicolas published in 1930 and 1931 at the presses of Draeger Freres. Paul Irib is a well listed, immensly talented artist who has been called one of the founders of Art Deco design. This particular advertising illustration is for Nicolas, who hired Iribe to design a large series of advertising ad campaigns to extole the virtues of the grape. "Relying on a sparse text and beautiful atmospheric plates, the images attempt to convince, you, the potential customer, that only the intrinsically civilized by-product of the grape, is worthy of consumption....." ".... just groupings of beautiful yet sinister image, artfully arranged to let you know, that drinking anything other than wine, betrays you, at the very least, as a social misfit, and ultimately perhaps, as morally deficient!" This first image is that of a nude man and woman, sitting down to dinner at a fine restaurant, entitle "La Tentation". The table is set up for a full silver service meal, with the tuxedo clad waiter looking rather horrified while he holds she shows the lady the wine menu. There is a further bent humour with the two fig leaves that the couple should be wearing is hanging over the Nicolas Wine sign. There is a bio of Irib below.

He began his career as an artist for L'Assiette au Beurre, was later closely Involved with the world of high fashion (he did publicity illustrations for Paul Poiret and was married to Coco Chanel at his premature death in 1935.) Paul Iribe began his career creating cartoons and illustrations for French periodicals, which brought him fame and he went on to contribute to other French fashion publications. He later set up his own studio where he produced designs for furniture, fabrics and wallpaper, stage decoration and costume design.

The lure of the cinema brought him to America in 1914, where he worked for Cecil B. de Mille and others. About 15 years later he returned to France and continued to illustrate books, periodicals and jewelry for his friend and future wife Coco Chanel.

CONDITION: The condition is superb with no damage of any kind. It has a flat black matte around the imagery which suits it nicely. Printed in 1930 A GENUINE OLD LITHOGRAPH on thick heavy paper NOT A MODERN COPY OR LATER REPRINT GENUINE VINTAGE 1930

SIZE: It is a large piece, measuring 18 1/2 inches high by 16 inches wide and that includes the 3 inch matte.