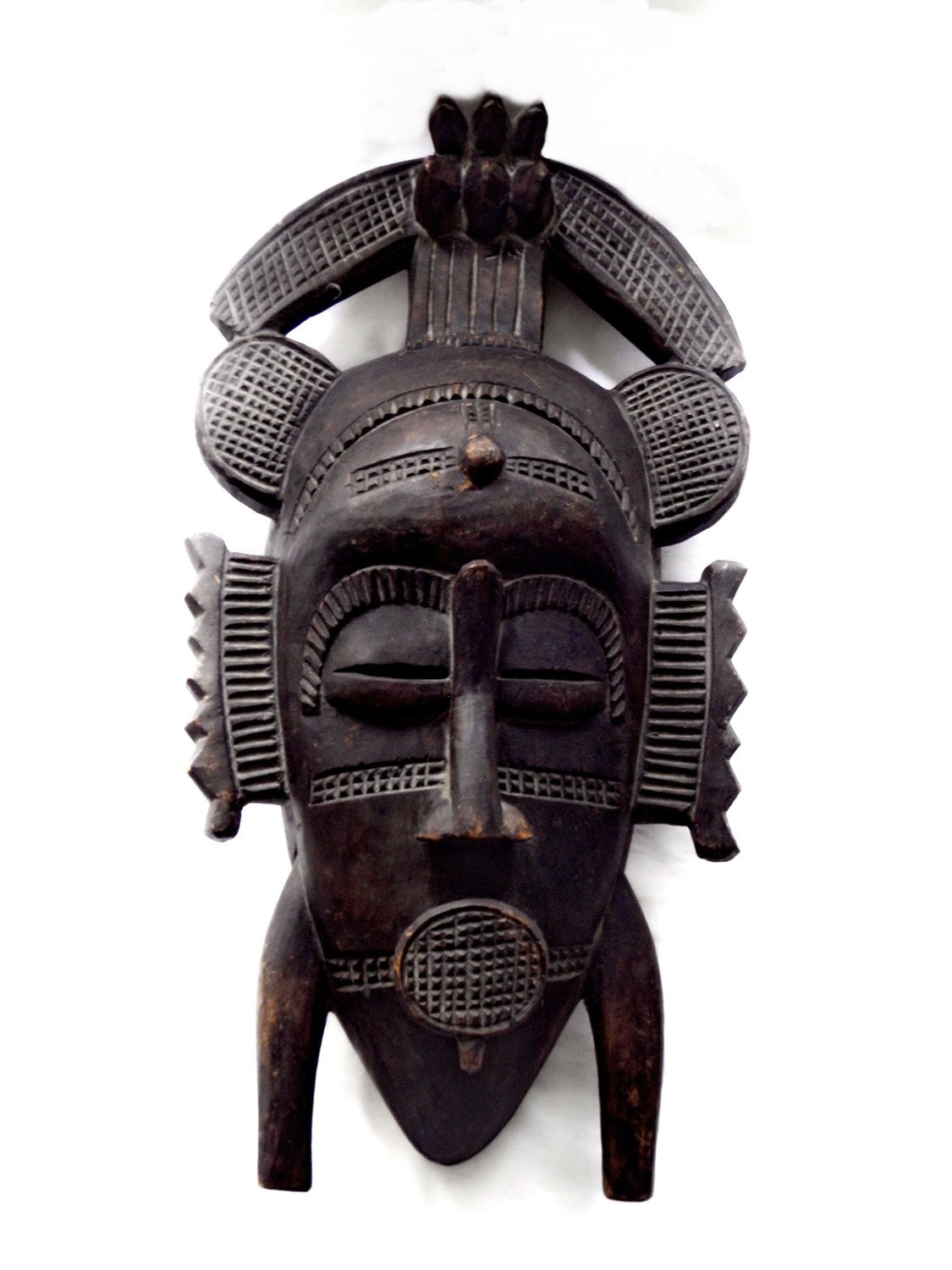 Vintage African, ethnic carving. Senufo Ivory Coast face mask combining the elements of humans and animals in harmony and kinship. Tribal art with generations of mythology and beliefs, the ancestors and spirit realm manifested in these great masks. There are two small holes on the back for hanging which will disappear behind the three bird head dress. A history below!

The Senufo number 1,000,000 to 1,500,000 and live in Côte d'Ivoire, Ghana, Burkina Faso, and the extreme south of Mali. They live principally off the fruits of agriculture and occasionally hunting. Senufo agriculture is typical of the region, including millet, sorghum, maize, rice, and yams. They also grow bananas, manioc, and a host of other crops that have been borrowed from cultures throughout the world. Small farm animals such as sheep, goats, chickens, guinea fowl, and dogs are raised. Minimal amounts of hunting and fishing also contribute to the local economy. Labor is divided between farmers and skilled artisans, and while it was once thought that these segments of society did not intermarry, In addition to a belief in a creator deity, ancestors and nature spirits, a central concept in Senufo religion is a female ancestral spirit called “ancient mother” or “ancient woman,” the sacred guiding spirit of each poro society. All adult men belong to the poro society, which maintains the continuity of religious and historical traditions, especially through the cult of the ancestors. The poro is the pillar of communal life. Responsible for initiation and training of the young boys, it is aimed at shaping an accomplished, social man who is integrated to the collective; it aids his entry into public responsibilities. A woman’s association, the sandogo, in charge of divination, is responsible for contact with the bush spirit who might be bothered by the activities of the hunt, farming, or of artisans. ~ zyama.com

The Senufo produce a rich variety of sculptures, mainly associated with the poro society. The sculptors and metalsmiths, endogamous groups responsible for making the cult objects live on their own in a separate part of the village. The attitude shown toward them by other Senufo is a mixture of fear and respect, owing to their privileged relationship with the natural forces that they are capable of channeling in a sculpture. During initiations, headpieces are worn that have a flat, vertical, round or rectangular board on top decorated with paint or pierced work. Many wood carvings of male figures depict these headpieces, sometimes on rhythm pounders used by young initiates, who beat the earth to call upon the ancestors to take part in the ceremony and purify the earth. The carvers also produce ritual female statues, including mother-and-child figures, as well as statuettes depicting bush spirits and supernatural beings and equestrian figures. Large statues representing hornbills (often seen also on masks) and used in the lo society as symbols of fertility are the standing birds called porpianong. Figures of the hornbill are used in initiation, and groups of birds on a pole are trophies for the best farmer. Figures of male and female twins and of horsemen are used in divination. These represent the spirit familiars enabling the divination process. The diviners themselves are women, forming the sandogo society. Shrine doors and drums are carved in relief, and small figures and ritual rings are cast in bronze.

Several types of mask are used depending upon the occasion. The kpelie, a human face with projections all around, is said to remind initiates of human imperfection. Danced by men, these masks perform as female characters. Animal-head masks usually combine characteristics of several creatures--hyena, warthog, and antelope. A type of animal mask called waniugo has a cup for a magical substance on top; these masks blow sparks from their muzzles in a nighttime ritual protecting the village from sorcerers. Among the Naffara group of the Senufo, masks of similar form but with an interior cavity too small for a human head are carried on the top corner of a rectangular, tent like costume called kagba. This mask is the symbol of the Lo, which only initiates may see. In the Korhogo region, deguele masks appear in pairs at funerals. They are of plain helmet shapes topped with figures whose bodies are carved to resemble a pile of rings.