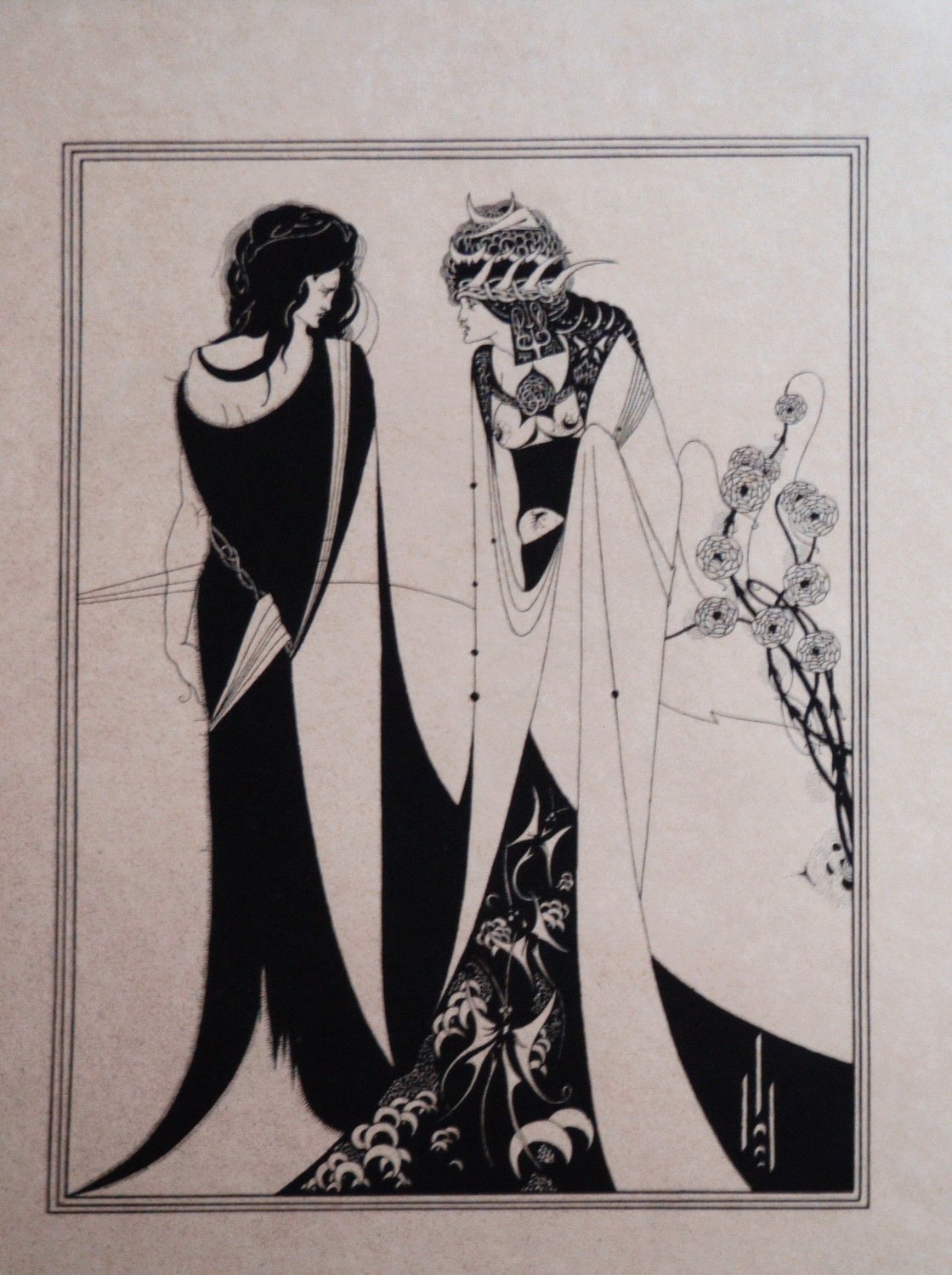 A stunning art deco 1920's Aubrey Beardsley lithograph illustration for Oscar Wilde's - A Plantonic Love; A Tragedy in One Act. Wilde wrote Salome in 1894 not many years after the term Art Nouveau was coined at the 1889 Paris Exposition. This beautiful work is printed on what I believe is Japanese Vellum and depicts a naked Page who is tenderly cradling the Young Syrians head in his hands. Behind the Page is a plant adorned with leaves and flowers which is supported by three canes and is in front of a stylized tree. Towards the top right hand corner is a partial image of the moon, complete with face. Directly above the Young Syrian's face is a cut flower seemingly floating down towards the ground, whilst a jester-like figure crouches beneath his legs. I also have John and Salome available. Same format, coloring etc.

CONDITION: Excellent vintage with toning throughout. My photos look muck whiter than the work really is. It is more the color of a manila envelop (if that makes sense.) Camera just couldn't get the tone. There is some discoloration at the very top in a strange but would disappear with matting and framing. No damage or repairs.

Aubrey Beardsley was perhaps the most influential and controversial artist of the Art Nouveau era, known for his dark, perverse images and grotesque erotica. His works are the Holy Grail for Art Nouveau enthusiasts and book collectors alike. Intensely eccentric, in both his public and private life, Beardsley aligned himself with other English aesthetes including Oscar Wilde. Since he died at the early age of 25 of tuberculosis, Beardsley’s works are as rare as they are beautiful.

From the moment Oscar Wilde's and Aubrey Beardsley's Salome first appeared in 1894, the English illustrated edition has been a cause célèbre, with Beardsley bearing the brunt of the blame. Erotic details were openly portrayed, most appearing to have nothing to do with Wilde's words.1 Readers wondered whether Wilde liked or disliked the illustrations; critics questioned the relationship between image and text. As an anonymous reviewer from the Studio of 15 February 1894 observed, it is debatable "whether the compositions do or do not illustrate the text."2 While the debate continues to this very day, a little-known observation made by Jean Cocteau (1889–1963) sheds new light on the Wilde–Beardsley collaboration. In an essay published in 1913, Cocteau states: "Aubrey Beardsley's charmingly pretty sister told me that 'Oscar' himself never intended his 'Salome' to be taken too seriously, and certainly her brother's famous illustrations, depicting Verlaine winking and the author tucked away in the moon, go far to substantiate the theory."3 The illustration "depicting Verlaine winking and the author tucked away in the moon" is A Platonic Lament, and while numerous critics have identified Wilde in the moon, Cocteau is the first to identify "Verlaine"—i.e., Paul Verlaine (1844–1896), the French symbolist poet and notorious practitioner of "the Love that dare not speak its name." This article focuses on Beardsley's vivid depiction of Verlaine and questions the significance of such a portrayal. It is a fanciful figure; however, it is also a caricature that alludes to the relationship of Paul Verlaine and Arthur Rimbaud (1854–1891) and thus provides a parallel love story commenting on that between the Page and the Young Syrian in Wilde's play.

A double romance plot sets the scene for Beardsley's A Platonic Lament. Wilde's play presents two love stories about forbidden and thwarted desire. There is a story about heterosexual lust: Herod wants [End Page 152] Salome, but she only has eyes for Iokanaan (John the Baptist). There is also a short-lived story about platonic love: an older man, the Page of Herodias, expresses his affection for a younger man, the Young Syrian. Neither story ends happily. Salome is crushed to death (Herod commands: "Kill that woman!"), and, much earlier, the Young Syrian kills himself as Salome declares her desire to kiss the prophet.
The bond between the Page and the Young Syrian is revealed after the Young Syrian is dead. Salome never notices the corpse, but the Page laments the death of his young friend [ source: Project Muse ]