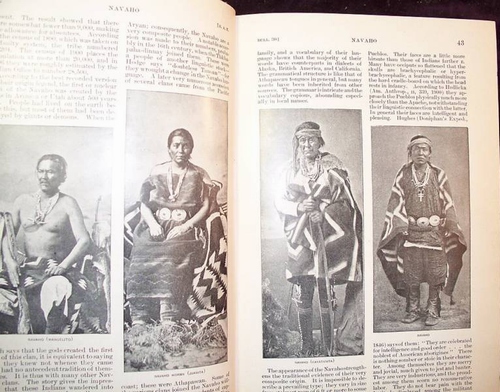 The books have been edited by scholar Frederick Webb Hodge. Part I: A - M; Part II: N - Z. Printed in Washington DC by the Government Printing Office 1907 and 1910 respectively. 1st Edition and Printing. Antiquarian Books

An important and major encyclopedia of the Native American Indians, their culture, language and life-styles is the culmination of years of in-the-field research by numbers scholars beginning as early as 1873. These volumes attemp to give ... ``brief description of every linquistic stock, confederacy, tribe, sub-tribe or tribal division, as well as settlements known to history, tradition, origin and the derivation of every name.`

Its scope incudes manners, archeology, customs, arts and industries with brief biographies of Indians of note.

Of great importance, also, for the Tribal Synonymy (pp. 1021 - 1178) and for the excellent bibliography; with a large fold-out map of Linguistic Families. These two books are solid and complete, with the original green cloth covers; the spines have been professionally rebacked, retaining most of the original green spine cloth, with the gilt lettering and designs. Published 100 years ago, complete matching 2-volume sets often sell for between $100 and $250. Such a nice complete set is not likely to come up for sale again soon on ebay.

From the 1st Volume: "Letter of Transmittal. Smithsonian Institution, Bureau of American Ethnology, , Washington, DC, July 1, 1905. Sir: I have the honor to submit herewith the manuscript of Bulletin 30 of the Bureau of American Ethnology, entitled "Handbook of American Indians," which has been in preparation for a number of years and has been completed for publication under the editorship of Mr. FW Hodge. Then Handbook contains a descriptive list of the stocks, confederacies, tribes, tribal divisions, and settlements north of Mexico, accompanied with the various names by which these have been known, together biographies of Indians of note, sketches of their history, archeology, manners, arts, customs, and institutions, and the aboriginal words incorporated into the English language. Respectfully, WH Holmes, Chief. The Secretary of the Smithsonian Institution, Washington DC."

From the Preface of 1st Volume: "During the early exploration and settlement of North America, a multitude of Indian tribes were encountered,m having diverse customs and languages. Lack of knowledge of the aborigines and of their languages led to many curious errors on the part of the early explorers and settlers: names were applied to the Indians that had no relation whatever to their aboriginal names; sometimes nicknames were bestowed, owing perhaps to personal characteristics, fancied or real; sometimes tribes came to be known by names given by other tribes, which were often opprobrious; frequently the designation by which a tribal group was known to itself was employed, and as such names are oftentimes unpronounceable by alien tongues and unrepresentable by civilized alphabets, the result was a sorry corruption, varying according as the sounds were impressed on Spanish, English, French, Dutch, German, Russian, or Swedish ears. Sometimes, again, bands of a single tribe were given distinctive tribal names, while clans and gentes were often regarded as independent autonomous groups to which separate tribal designations likewise were applied. Consequently, in the literature relating to the American Indians, which is practically coextensive with the literature of the first three centuries of the New World, thousands of such names are recorded, the significance and application of which are to be understood only after much study..."