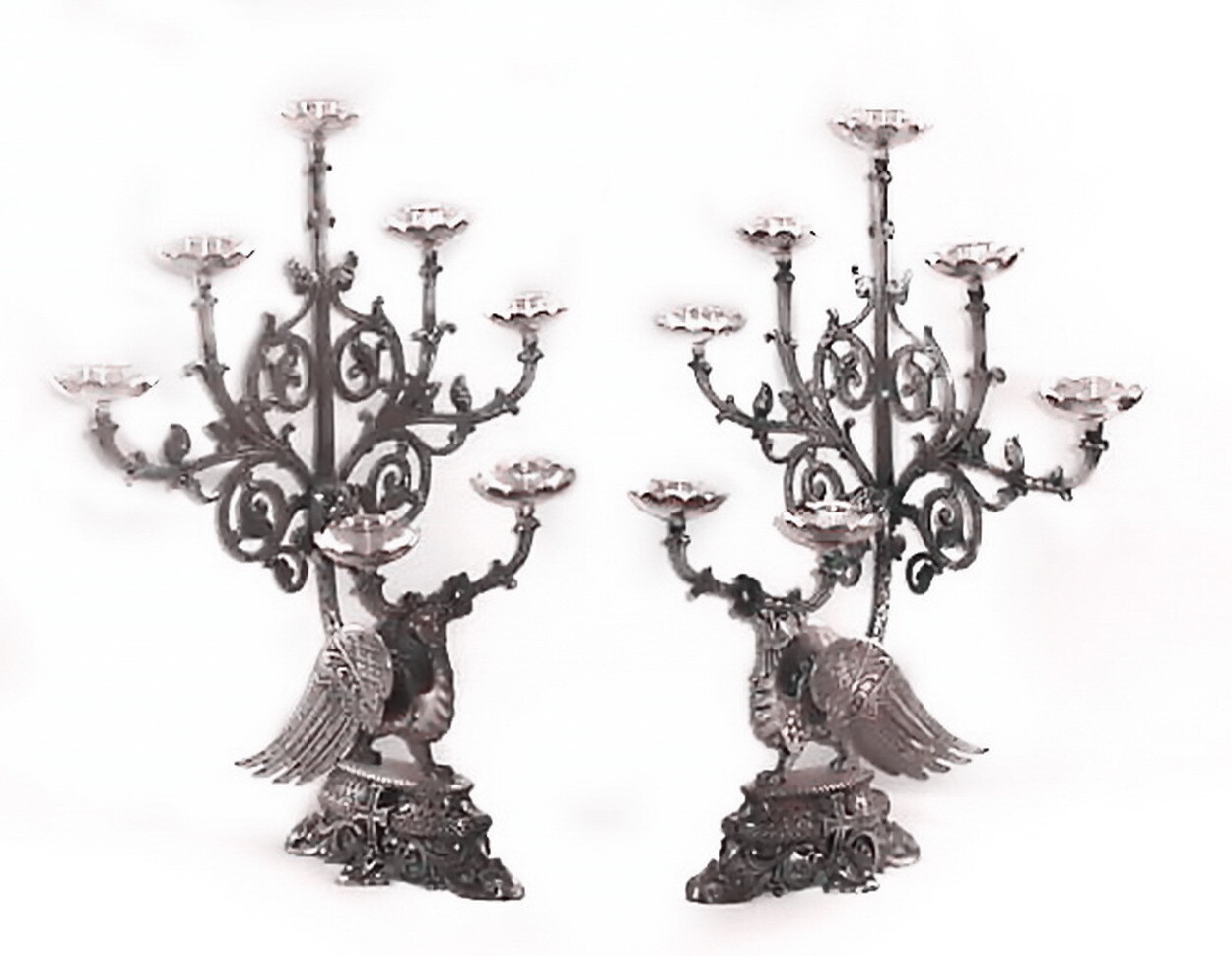 IMPORTANT 1800s antique rare Pair (2) Gothic 19th Century Art Nouveau (or earlier) Church Candlesticks / Candelabra / Candle Vestments with intricate mythological imagery relating to the Knights Templar note the cross. Silver plated solid bronze pair with seven (7) candle holders each. The image of the Phoenix and/or Griffin (also spelled Gryphon) rising from the ashes is a very classic image representing eternal life and/or resurrection. The phoenix is born over and over again and is thus given a chance to make better choices and a better life. Popular culture also uses the term "a phoenix rising from the ashes" to describe an individual who has been beaten down by hard times and rises anew with hope and better fortune. There are more dramatic repousse / etched foliate, birds and crosses. A stunning and dramatic pair of candle sticks. Better photos coming soon. Shipping to be calculated based on location and method chosen. CONDITION: No damage or repairs, but one is a bit wonky and needs to be straightened. The easier way to go would be to put a small felt pad under the one base foot to level it. Very difficult to photograph because of the sheer size of the pair. Please use the zoom feature on the individual pieces to inspect it and to fully appreciate the detail.

HISTORY: LINEAGE OF A CONCEPT

"If the story of the phoenix was well known at the time Clement wrote his letter, where did it come from originally? According to 19th-century British theologian J.B. Lightfoot, “the earliest mention of the phoenix is in Hesiod,” a seventh- or eighth-century-B.C.E. Greek poet. From the Greeks the story passed to the Romans. In 47 C.E., a bird said to be a phoenix was exhibited at Rome, and Lightfoot suggested that the exhibit “may have been seen by Clement.” Although “no one doubted” that this particular bird was a fake, it seems that people nonetheless believed the stories concerning the existence of such a creature.

In 8 C.E., 88 years prior to the likely date of Clement’s letter, the Roman poet Ovid completed his Metamorphoses, an instantly popular work based on Greek mythology. In a section concerning the doctrines of Pythagoras, Ovid wrote of a similar mythical creature. In Ovid’s version, however, the phoenix built its nest in “a lofty swaying palm” before departing to “the Sun’s holy temple” in “the Sun’s great city.”

The palm may have held a combined significance with the phoenix in the pagan world. Dutch historian Roelof van den Broek notes that the ancient Greek word for phoenix sounds the same as the word for palm, a fact from which their classical association “seems to have been determined” (The Myth of the Phoenix According to Classical and Early Christian Traditions). Palms are evergreen, after all, a symbol of perpetual renewal that correlates with the imagery associated with the dying and reborn phoenix. In ancient Greece the palm tree was associated with the sun-god Apollo; his myth suggested that the goddess Leto had given birth to him under a palm. In ancient Assyrian mythology, the tree symbolized the mother goddess Ishtar. The Mesopotamian goddess Inanna, through her marriage to the fertility god Damuzi, was seen as the one who made the harvest of the date palm flourish. And to the Romans, the palm signified the goddess Victory.

Yet another version of the phoenix myth describes the bird combusting in flame, a concept that again links the bird to the sun. The fiery phoenix, just like the sun god, was associated with death and rebirth for the ancient Greeks and Romans.

However, it is specifically to Egypt that Clement’s curious example leads. Clement describes the reborn phoenix as taking its parent’s remains “into Egypt, to the city called Heliopolis.” Heliopolis, or City of the Sun, was located a few miles northeast of modern-day Cairo. Clement, like Ovid, provides the significant piece of information that the bird was supposed to deposit its parent’s remains “on the altar of the sun” for the inspection of the priests. The sun god at Heliopolis was called Atum, a god identified with Ra, who was revered as a creator bringing order out of chaos. Atum is often depicted in human form, seated on a throne, holding a staff and wearing the red and white double crown of Egypt.

The Egyptian sun god was believed to have risen from the chaos-waters as a benu (or bennu) bird at creation, and this lore appears to be the source of the myth of the phoenix. According to the Handbook of Egyptian Mythology, the word benu “probably comes from an Egyptian verb meaning to rise and to shine.” The same source notes that from “the Pyramid Texts onward, the benu bird was closely associated with the creator sun god.” David Fideler suggests that the benu bird was believed to be the “soul of Ra” (Jesus Christ, Sun of God: Ancient Cosmology and Early Christian Symbolism).

A FABLE TAKES WING
Having thus been carried from Egypt to the Greek and Roman world, the pagan phoenix-in-the-palm myth—symbolizing a mother goddess and a creator/sun-god consort—was easily absorbed into Christian symbolism and artwork.

Clement was the first non-pagan writer to find new meaning in the myth. In his retelling of it, he specified that the bird’s nest was “of frankincense and myrrh and other spices.” Whether this was a conscious effort to link the myth to Christ’s birth is impossible to say, but later Christian writers similarly limited themselves to naming only these two. Yet numerous spices, most often including cinnamon, are mentioned across various traditions of the phoenix myth. So the fact that two of the Magi’s gifts are among them can have no real symbolic value."