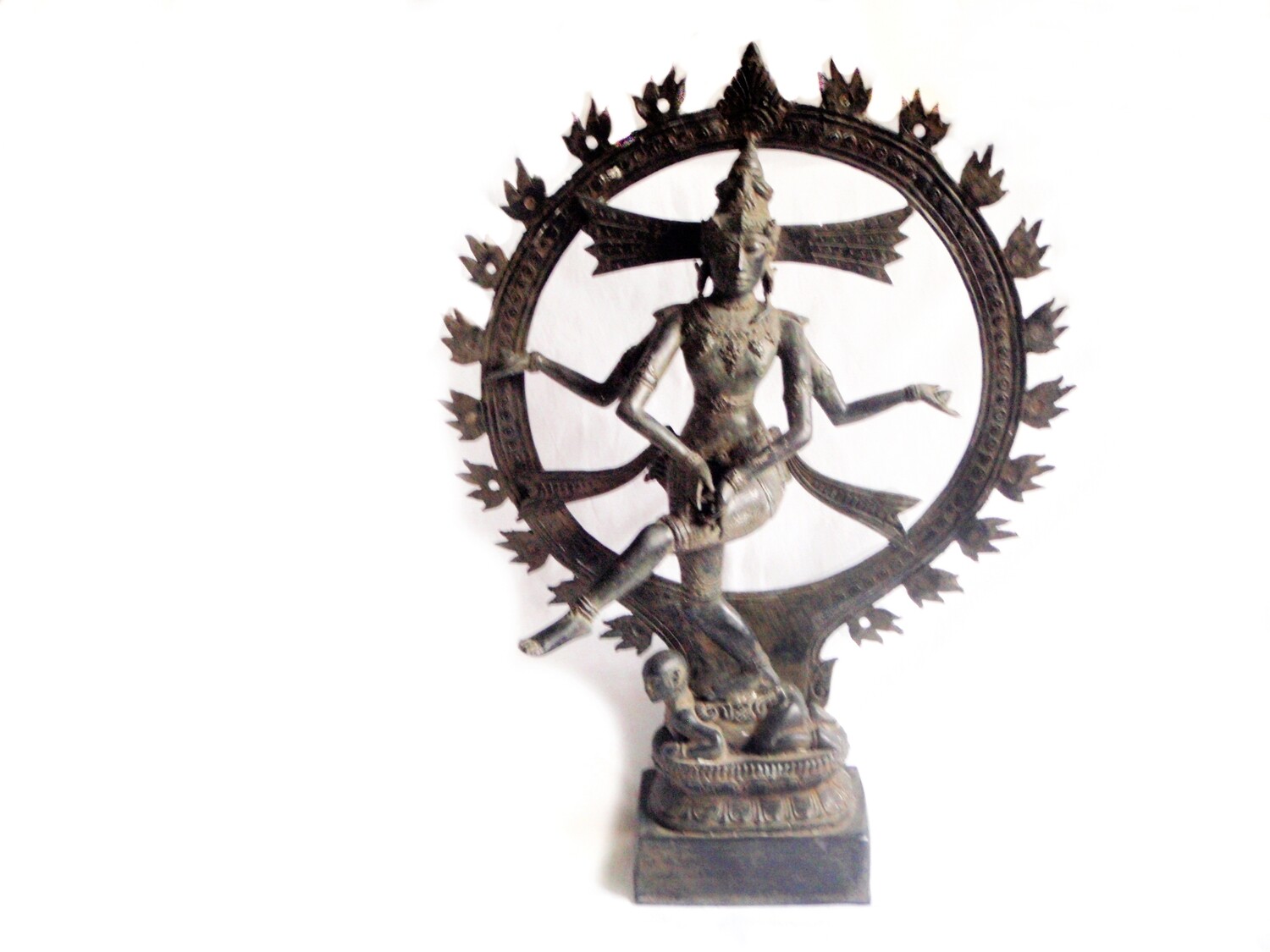 Hindu Lord God Shiva as Nataraja large sculpture. Nataraja means Lord of the Dance and depicts Shiva as the cosmic ecstatic dancer. Surrounded by flames and standing on Apsamara who is lying on a lotus and signifies ignorance (see background below.) This is not a refined and highly polished out piece. It is either bronze or brass as seen in small parts on the hollow base which has remnants of red clay which makes me wonder if it was not resting and being displayed in a shrine of some sort. The significance of this dance is seen as the image of his rhythmic or musical play which is the source of all movement within the universe. This is represented by the circular or elliptical frame surrounding Shiva. Secondly, the purpose of his dance is to release the souls of all men from the snare of illusion. Lastly, the place of the dance, Chidambaram, which is portrayed as the center of the universe, is actually within the heart. More photos available -- please ask. This is large and heavy and shipping reflects that and a location estimate, insurance and tracking.

CONDITION: Its old but I am not sure how old. It needs cleaning depending on your taste. There is residue of red clay in the hollow base. Some of the open plugs in the flames are not punched out. PLEASE use the zoom feature to determine if the condition reflects your expectations of vintage and antique condition, photos are an integral part of the description.

Nataraja (Sanskrit: नटराज, romanized: Naṭarāja, meaning "the lord of dance") is a depiction of the Hindu god Shiva as the cosmic ecstatic dancer. His dance is called Tandavam or Nadanta, depending on the context of the dance.[1][2] The pose and artwork is described in many Hindu texts such as the Anshumadbhed agama and Uttarakamika agama, the dance relief or idol featured in all major Hindu temples of Shaivism.[3]

To preserve knowledge in the world, Apasmāra could not be killed; to do so would throw out the balance of knowledge and ignorance—as to kill Apasmāra would mean attaining knowledge without effort, dedication and hard work. Consequently, this would lead to the devaluing of knowledge in all forms. To subdue Apasmāra, Lord Śiva adopted the form of Śrī Naṭarāja - the Lord of Dance and performed the cosmic dance of Tāṇḍava. During this dance, Śrī Naṭarāja suppressed Apasmāra by crushing him with his right foot. As Apasmāra is one of the few demons destined to immortality, it is believed that Lord Śiva forever remains in his Śrī Naṭarāja form suppressing Apasmāra for all eternity.

This mythological dwarf is generally depicted with his hand in Añjali Mudrā. He is often depicted in this posture in depictions of Naṭarāja.