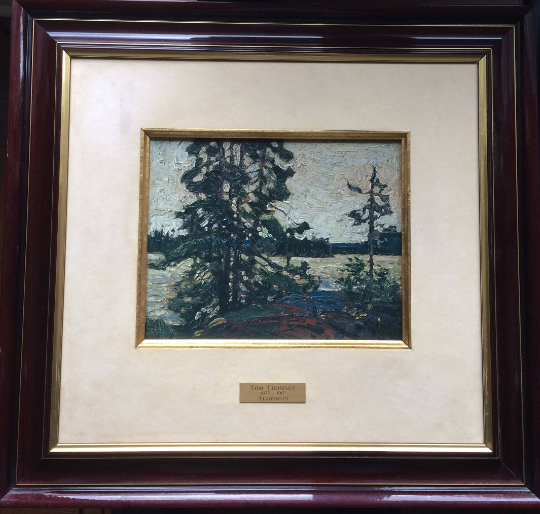 More vintage and antique Paintings and Illustrations A fantastic and rare Tom Thompson oil painting on board entitled Algonquin by one of the founding members of the famous Canadian Group of Seven. Re-created brush stroke for brush stroke in a worldwide limited edition of which this is 52 / 460. Dating from the early 1990's and beautifully, professionally framed by Master Editions in a rich mahogany frame, faux suede matte and gold filet. It bears the Phoenix Marque of Authenticity plaque and wax seal.

CONDITION: Vintage without signs of damage or repairs - there is a small smudge on the suede that needs to be clean, or, in my opinion just left alone.
SIZE: The image size is 13 11/6 inches by 10 1/2 inches. Overall size is 24 inches wide by 22 inches high
Tom Thomson
From Wikipedia
Tom Thomson
Born Thomas John Thomson
August 5, 1877
Claremont, Ontario
Died July 8, 1917 (aged 39)
Canoe Lake, Algonquin Park, Ontario
Thomas John "Tom" Thomson (August 5, 1877 – July 8, 1917) was an influential Canadian artist of the early 20th century. He directly influenced a group of Canadian painters that would come to be known as the Group of Seven, and though he died before they formally formed, he is sometimes incorrectly credited as being a member of the group itself. Thomson died under mysterious circumstances on Canoe Lake in Algonquin Park.
Personal life
Thomas John "Tom" Thomson was born in Oakville, Ontario to John and Margaret Thomson and grew up in Leith, Ontario, near Owen Sound in the Municipality of Meaford.[1] In 1899, he entered a machine shop apprenticeship at an iron foundry owned by William Kennedy, a close friend of his father. He was fired from his apprenticeship by a foreman who complained of Thomson's habitual tardiness.[citation needed] Also in 1899, he volunteered to fight in the Second Boer War, but was turned down because of a medical condition.[citation needed] Thomson was reputed to have been refused entry into the Canadian Expeditionary Force for service in the First World War also. He served as a fire ranger in Algonquin Park during this time.[2] In 1901, he enrolled in a business college in Chatham, Ontario, but dropped out eight months later to join his older brother, George Thomson, who was operating a business school in Seattle.[citation needed] There he met and had a brief summer romance with Alice Elinor Lambert.[citation needed] In 1904, he returned to Canada, and may have studied with William Cruikshank, 1905–1906.[2] Settling in Toronto, Thomson joined Legg Brothers, a photo-engraving firm. In late 1908/early 1909, Thomson joined Grip Ltd., an artistic design firm in Toronto, where several of the future members of the Group of Seven also worked. In fall 1912, Thomson left Grip with several other designers to work at another Toronto firm, Rous & Mann.
Thomson fishing in Algonquin Park
Thomson first visited Algonquin Park in May 1912.[5] There after he often traveled around Ontario with his colleagues, especially to the wilderness of Ontario, which was to be a major source of inspiration for him. In 1912 he began working, along with other artists who would go on to form the Group of Seven after his death, at Rous and Mann Press, but left the following year to work as a full-time artist.[citation needed] He first exhibited with the Ontario Society of Artists in 1913, and became a member the following year.[citation needed] He would continue to exhibit with the Ontario Society until his death. In 1914 the National Gallery of Canada began acquiring his paintings, which signaled a turning point in Thomson's career.[6] For several years he shared a studio and living quarters with fellow artists. Beginning in 1914 he worked intermittently as a fire fighter, ranger, and guide in Algonquin Park, but found that such work did not allow enough time for painting.[7] During the next three years, he produced many of his most famous works, including The Jack Pine, The West Wind and The Northern River.
Art and technique
Tom Thomson cabin at McMichael
Thomson was largely self-taught. He was employed as a graphic designer with Toronto's Grip Ltd., an experience which honed his draughtsmanship. Although he began painting and drawing at an early age, it was only in 1912, when Thomson was well into his thirties, that he began to paint seriously. His first trips to Algonquin Park inspired him to follow the lead of fellow artists in producing oil sketches of natural scenes on small, rectangular panels for easy portability while travelling. Between 1912 and his death in 1917, Thomson produced hundreds of these small sketches, many of which are now considered works in their own right, and are housed in such galleries as the Art Gallery of Ontario in Toronto and the National Gallery of Canada in Ottawa.