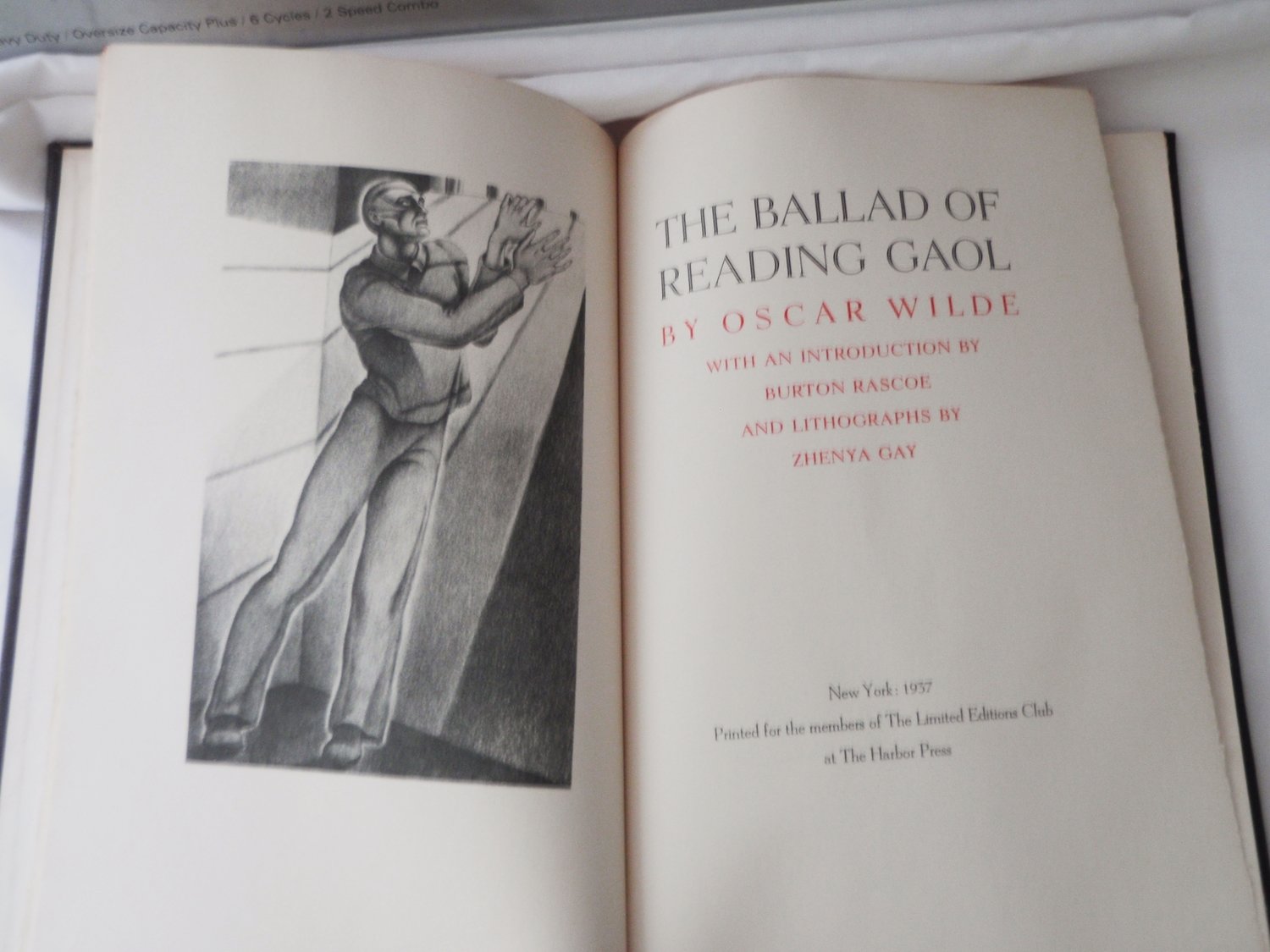 A rare antiquarian Limited Edition of Ballad of Reading Gaol by Oscar Wilde. Published in New York by Harbour Press 1937 for members of Limited Editions Club with an introduction by Burton Rascoe This is an early copy signed by Zhenya Gay and is #216 of #1500. Bound in Moroccan granite-gray sheepskin lear embossed to resemble a jail cell wall. Vertical gilt titling on flat spine. Has remarkable lithographs by Zhenya Gay depicting prison life. Unusually nice grey block and bars patterned lear binding. With 8 full-page illustrations in original slip case. Binding by Bernard Middleton who was called "one of most important and influential bookbinders of last hundred years and, arguably, of any period." all-over blind-tooled grid on boards effectively suggests tight restriction of prison bars. I have included photos of several rare, 1st books that I have listed in the shop for consideration.

A long poem in six-line rhymed stanzas, " Ballad of Reading Gaol" was written in France in 1897 after Wilde's release from prison. Written in memory of Charles Wooldridge, who was executed in 1896 for killing his wife in a jealous rage, it is generally considered to be Wilde's greatest poem - "society's cruelty in inflicting of punishment without understanding." Despite stigma attached to Wilde at time (or perhaps because of publicity related to his infamy,) this poem was a considerable commercial success. It also was hailed by critics as a successful change in direction in Wilde's poetry, characterized by a much greater expression. MORE PHOTOS please email - More about the artist below

CONDITION: Superb condition in its original cardboard sleeve. Some minor rubbing to lear where it is pulled from hard sleeve. Rubbing to top and bottom spine - no damage, no foxing and no odor. Contains a book plate dated 1943 to one; Marjorie Frye Skinner and a lovely piece of art on its own.

Zhenya Gay was born in Norwood, Massachusetts in 1906. After attending Columbia University, she studied with sculptor Solon Burglum and later took evening classes with artist Winold Reiss. Her earliest artistic works were free-lance movie posters, newspaper advertisements, and theatrical costume designs. Her first book illustrations were a lithograph in an essay on Thomas Hardy, and artwork for anthologies published for adult readers.

Her travels throughout Europe and America introduced Gay to many interesting people and animals. Among her primary interests was a fascination for animals, particularly baby animals. To be nearer to her subjects, Gay gave up her New York apartment in 1954 and moved to a wooded area in the Catskill Mountain foothills. There she delighted in drawing the woodland creatures of the surrounding region. Gay became convinced that writing and illustrating children's books was a more proper venue to share her discoveries and delights. Her first children's book, Pancho and His Burro, written by Jan Gay, was published in 1930. Over the next thirty-five years, Zhenya Gay wrote and/or illustrated more than forty-five books, most of them children's books with either animal or Latin American themes.

Zhenya Gay died on August 3, 1978. The Kerlan Collection at the University of Minnesota holds the material for many of her works.