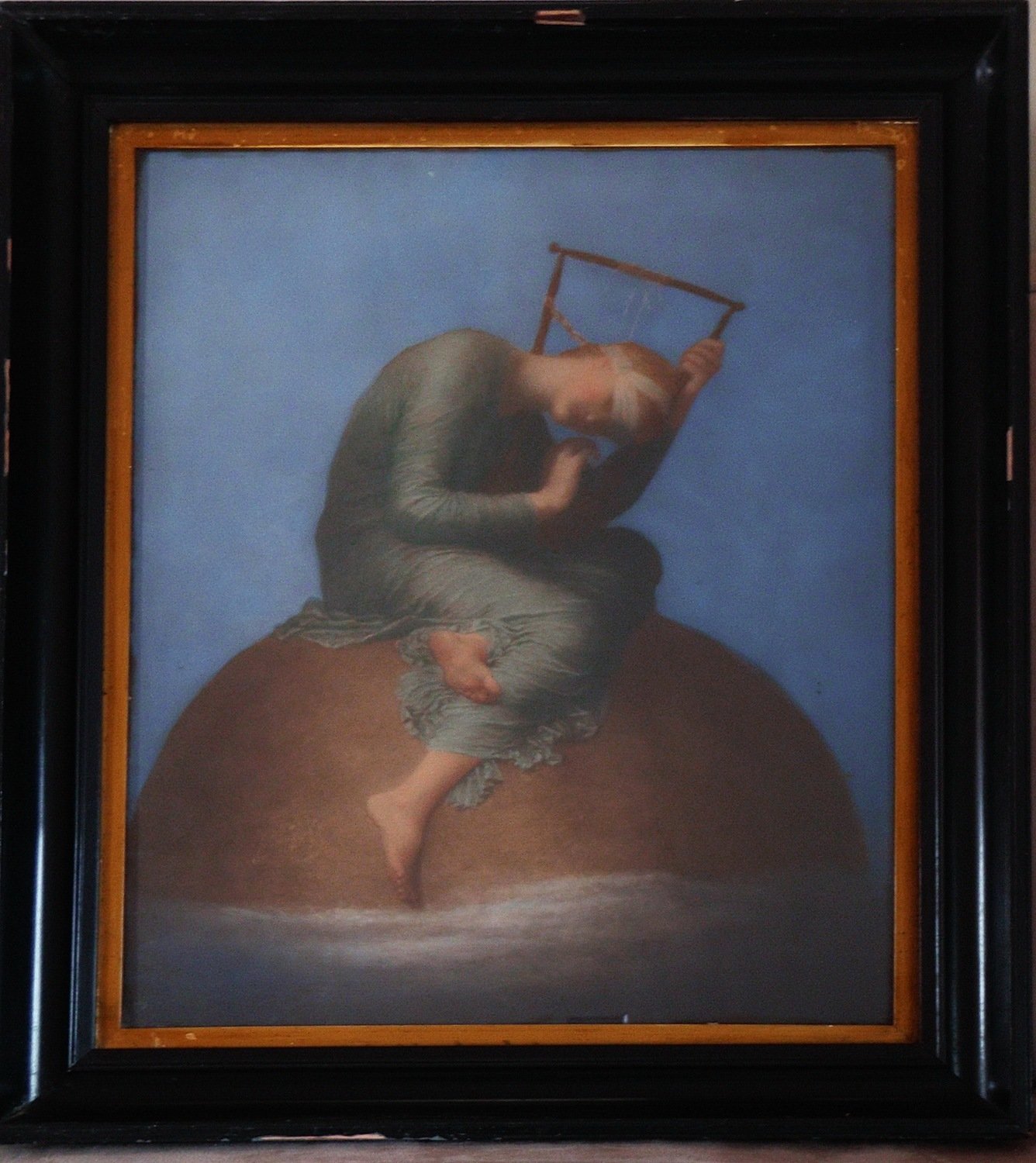 This is an original early 1900's, art nouveau era pastel painting of Hope by George Frederick Watts R.A. (1817-1904) Blind Hope has been professionally framed by Joseph Wilson, Framer and Print Maker London, England. There are no pixels on this piece so it is definitely not a print. It has been framed with gold gilt wood inner frame and black gesso frame, and a board backing which bears the print makers label. The gold inner frame has come loose from the black frame. It has been very difficult to photograph this because of the glass. This is unsigned.

CONDITION: I do not see any damage to the pastel. There are waves in the paper behind the glass, but, from my point of view its appropriate for its age. There is one small scratch as it looks like someone, at some point had taken this out of the frame to inspect it. There seems to be some loose fibre in a few spots. None of this distracts in my opinion and can easily be dealt with when being re-framed (if that is the choice.) The gold gilt fillet is just fine, the gesso frame has some wear - bruises, bumps and lost gesso but again, that's authentic wear for the piece. IF you wanted to use the original black framed you'd need wire cutters to remove the existing nails and then re-attach. Personally, I like it the way it is.

The work is one of a series of allegorical subjects which Watts intended for a decorative scheme known as the 'House of Life'. Traditionally the figure of Hope is identified by an anchor, but Watts was seeking a fresher, more original approach. He painted blind Hope seated on a globe and playing on a lyre which has all its strings broken except one. She bends her head to listen to the faint music, but her efforts appear forlorn; the overall atmosphere is one of sadness and desolation rather than hope. The picture's sense of melancholy is enhanced by the soft brushwork and the translucent mists that envelop the floating globe.

Watts appears to have drawn on several contemporary sources for the figure of Hope. Her pose is comparable to Rossetti's siren in A Sea Spell of 1877 (Fogg Art Museum, Harvard University) and also recalls Albert Moore's sleeping women in Dreamers (1882, Birmingham City Museum and Art Gallery). The bandaged head, denoting blindness, may be linked to the allegorical figure of Fortune in Burne-Jones's The Wheel of Fortune (c.1871, Tullie House Museum and Art Gallery, Carlisle), which was once owned by Watts.

Watts painted two versions of Hope. Watts believed the second picture to be the better version and exhibited it at the South Kensington Museum and at the Paris Exposition Universelle in Paris in 1889. This second version is softer in execution and the girl wears a more enigmatic expression on her face. Watts also omitted the star, the only note of optimism, at the top of the picture.

It has been suggested that the mood of desolation may reflect Watt's own sadness at the death of his adopted daughter Blanche's one-year old child. Despite its sense of gloom, the picture was well received and proved extremely popular with the public. The artists F.G. Stephens called Hope a "piece of tone harmony" (Athenaeum, 24 April 1888, p.561), inviting comparisons with the work of Whistler and the Aesthetic movement

Watts was something more than a painter. He painted for no gain save the reward of achievement when he felt he had a message to deliver through his pictures. To his purposes he deliberately sacrificed his natural dexterity and technique, holding that the artist should be lost in his picture. Nevertheless, the power of colour which is exhibited in "Hope" is one of the most marked qualities of his work. The whole is a delicate harmony in blues and greens, and is suggestive of the Italian influence which so strongly affected the painter.