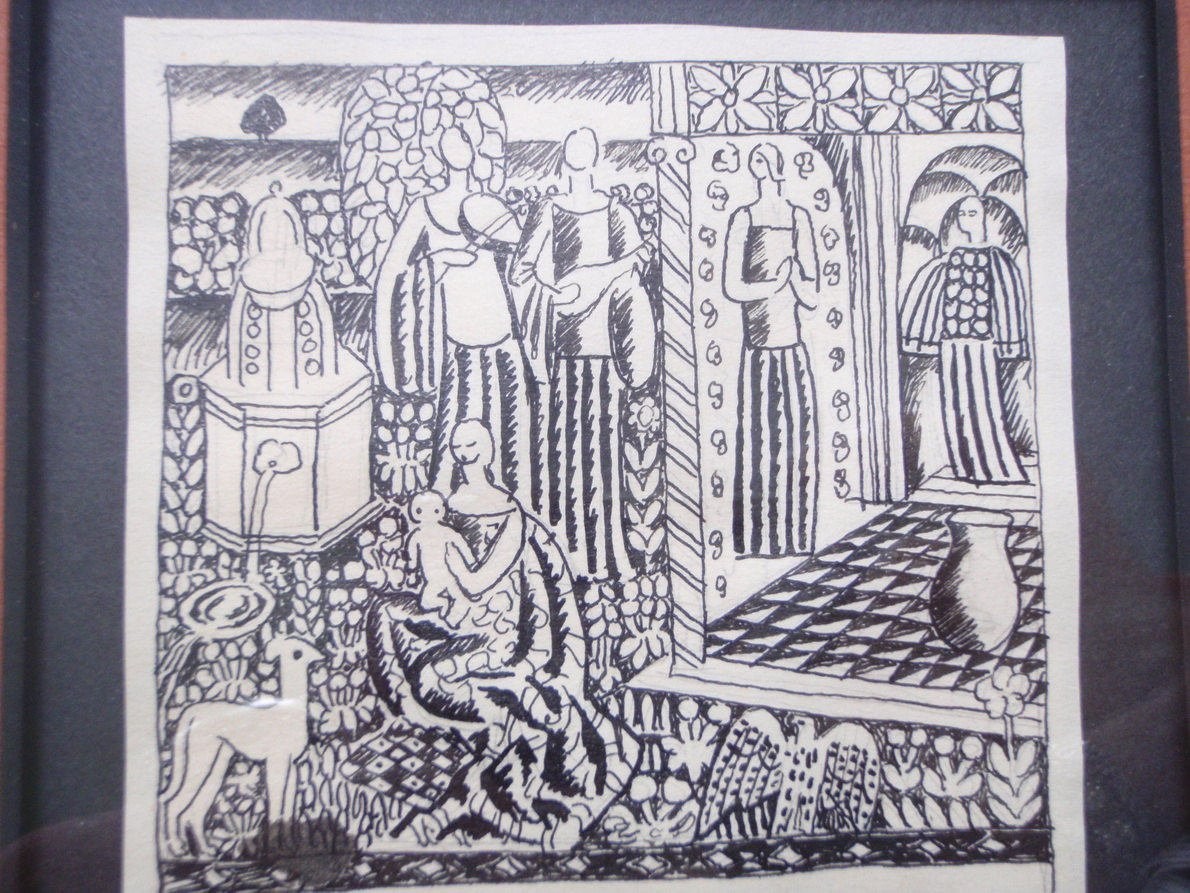 Art deco period framed painting by listed Edward Buk Ulreich. The allegorical or mythological imagery is wonderful, with cherubim watching over a lady while playing a lyre in one panel and the other a woman and another deer. Edward Ulreich was born in Koseg, Austria-Hungary in 1889. This is one of nine pieces that I have available. Every aspect is pure deco and has been framed with a black matting and black frame. Please take a moment to look at the other pieces. There is a biograph of Mr. Ulreich below, of note is that he was one of the key designers for the 1933 Chicago World’s Fair’s “Century of Progress” Exhibition, as well as murals for Radio City Music Hall. He exhibited at the Art Institute of Chicago, Dudensing Gallery (NYC), Vienna Secession, and the Pennsylvania Academy of Fine Art. He illustrated several magazine covers in the 1920s-30s. Larger paintings sell for between 3500 - 4500 as per Treadway/Toomie Auctions.

PROVENANCE: Originally from the Lovisco Gallery, New York City; Purchased from the Lovisco estate in Montreal, Canada in 1990 by John Shearer of Toronto, Ontario, Canada, and subsequently purchased by me from Mr. Shearer. Unsigned, comes with certificate of authenticity (COA) describing provenance.

CONDITION: Excellent condition which as been professionaly framed with a double matte.

SIZE: The overall size of the graphic and ink painting 3 inches by 3 1/4 inches, framed size is 14 inches x 10 inches.

His family migrated to the United States and settled in Kansas City, Missouri when he was 6 months old. Ulreich studied at the Kansas City Art Institute for 4 years. After finishing at KCAI he worked as a cowboy on a ranch on an Apache Indian reservation in Arizona. Here he developed a liking for Indian subjects in his work, and sent a painting to the Pennsylvania Fine Arts Academy. The painting won him a 4-year scholarship to study there.

Ulreich also won various prizes such as the Cresson Memorial Traveli9ng Scholarship in 1913 and 1914. Consequently, he spent 8 months in Europe, returning to New York in 1915, where he worked a year before spending time in the army. He executed his first murals at Denishawn Studios in California after World War I. He then painted church murals in Cleveland and Chicago (1924), wall hangings for the Chicago Temple Building and did marble mosaics for the 1933 Chicago World’s Fair’s “Century of Progress” Exhibition. Other commissions and Works Project Authority (WPA) murals included Radio City Music Hall; Woodside Public Library, Long Island, NY; United States Post Office (USPO) in Columbia, MO; USPO in Concord NC; USPO in Rockford ND; and USPO in Tallahassee, FL. Ulreich exhibited in Paris and Vienna, and Lived in New York City and San Francisco (1962), where he died at the age of 77 in 1966. His history included studies with Mlle Blumberg, and exhibits at the Anderson Gallery NY (one man); Art Directors’ Club, Dudensing Gallery (1930); Philadelphia Art Alliance (1939); and at the Bonestell Gallery (1941). His colleague and dealer was artist Niel Lovisco (lived 1900-1981). The Lovisco papers for 1942-1989 are preserved in the Smithsonian Archives of American Art. Ulreich is listed in Who Was Who in American Art, Davenport’s Art Reference and Price Guide, (misspelled as “Ulrich” in Davenport’s), Dawdy’s “Artists of the American West”; Mantle Fielding’s Dictionary of American Painters; Samuels’ “The Illustrated Biographical Encyclopedia of Artists of the American West,” and numerous other publications. A fine addition to your collection of American miniatures, or a distinguished accent for a small wall. Guaranteed to be by Ulreich, guaranteed to be an original painting.