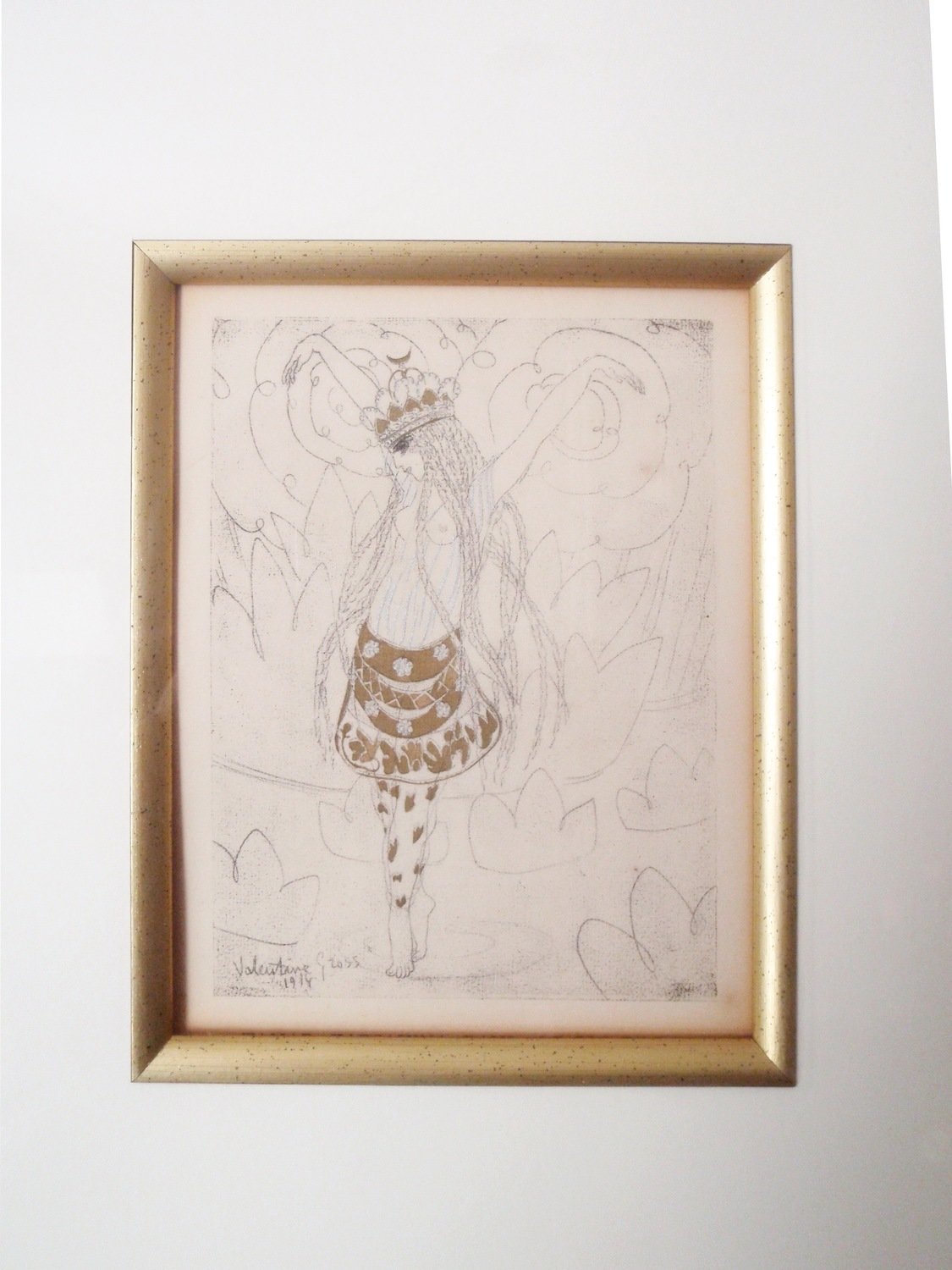 Fantastic professionally framed Valentine Gross ( nee Hugo) genuine hand colored pochoir featuring Tamar Karsavina dance costume from Le Coq d'Or - The Golden Rooster which is signed in the plate. It is from the July 1914 edition of La Gazette du Bon Ton - 7th edition. Professionally framed in a gold gilt frame, generous wide matte with gold fillet. Valentine Hugo , born Valentine Marie Augustine Gross , born in Boulogne-sur-Mer on the March 16 , 1887, And died in Paris on 16 March 1968 was a French artist -painter and illustrator. She hobnobbed and worked with some of the greatest of their time; Marcel Proust, Andre Gide, Paul Morand, Picasso, Jean Cocteau, Serge Dighilev and others (see below.) More vintage and antique Paintings and Illustrations

CONDITION: Superb without damage or repairs. Original overall toning and darker than the photos attached. The frame has a few bumps but I would not consider reframing.

From 1907 to 1910 , Valentine Gross studied at the Fine Art 's in Paris . After graduation, she joined the circles of Marcel Proust , André Gide , Paul Morand , Pablo Picasso , Jean Cocteau , Erik Satie 2 , Maurice Ravel , Serge Diaghilev , Léon-Paul Fargue , Roger de la Fresnaye , it receives in its app art ement of the street Montpensier in Paris. In 1913 , it notes and draws,

After the Great War , she continued to frequent her friends in the Group of Six where she met Georges Auric . In 1919 , she married the painter Jean Hugo. The couple entertained in their Parisian salon at the Palais-Royal 2 . She collaborated with her husband in 1921 in the creation of the costumes of the Married of the Eiffel Tower by Jean Cocteau. She spent a vacation with the two writers in 1921 and 1923 at the Grand Piquey , near Arcachon . In 1924 , she again realized the costumes of a play by Jean Cocteau , Romeo and Juliet .

Around 1926 , she met the surrealists . In 1929 , she has an affair with Paul Éluard and with André Breton and divorced two years later.

She painted the portrait of several surrealists and illustrated the works of René Char , René Crevel , Paul Éluard , but also Lautréamont and especially the reissue of the bizarre tales of Achim von Arnim , of which Breton wrote the preface.

She exhibited with Max Ernst , Giacometti , Arp , Pablo Picasso , Marcel Duchamp and Man Ray , but was then experiencing a morally difficult period 2 aggravated by financial difficulties following the 1929 crisis and the collapse of the art market. She participated in Surindépendants Fair in Paris in 1933, and the exhibition Fantastic Art , Dada , Surrealism at the Museum of Modern Art of New York in 1936.

In 1942, she found Paul Eluard for the Conquest of the world by the image . She ended her life alone and in embarrassment in her art on the rue de Sontay , near the Place Victor Hugo in Paris, obliged to sell books and valuables in 1963.

In 1977, the Cultural Center of Champagne in Troyes, devoted to it the first monographic retrospective ever organized in France.